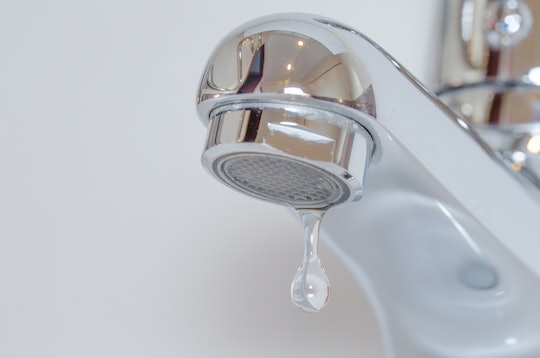 It's a shame they don't teach preadolescent girls to understand their bodies' fertility signs instead of just passing out pads after going over diagrams on protected sex. I didn't learn to read the signals of my own body until adulthood, and it has been one of the most empowering experiences I've known as a woman. While cervical mucus observation and charting is most widely associated with trying to conceive, I've had success in the past using it to avoid pregnancy, too. But admittedly, there is a big learning curve. Questions like, "What does watery cervical mucus mean?" and "How do I know if I'm fertile?" plague every new beginner.

But before you can start interpreting fertility signs, you've got to get comfortable with a slightly gross bodily function: your cervical mucus. What is it, and why the heck do you have it? Suzanne Munson, a natural fertility expert for Fairhaven Health, explains it all in an interview with Romper. According to Munson, cervical mucus has many important functions: facilitating the passage of sperm to the fallopian tube for conception, providing protection and nutritional support for sperm, neutralizing acidity in the vagina, and preventing infections inside the vagina.

Even if it does remind you of a really bad sneeze, it's clearly not something you want to live without.

The ins and outs of observing your cervical mucus can vary with a woman's unique body, but there is a basic pattern that the majority of women are able to trace. According to Munson, "The production of cervical mucus is at its lowest immediately following your period, and some women report 'dryness' during this time. But, over the next several days, more mucus will become present and it will likely be yellow, cloudy, or white in color, and somewhat sticky to the touch. As you enter your fertile window, your cervical mucus will increase in quantity and moistness. Color may be cream-like in appearance."

You begin counting your monthly cycle on the first day of your period, and ovulation usually occurs about two weeks after. Munson explains that you will know your day of ovulation is coming because "the production of cervical mucus will be at its highest and the consistency and color of the mucus will be similar to egg whites for a few days prior." After ovulation has taken place, cervical mucus becomes thicker and you might notice it less frequently until your next period arrives.

But back to the original question: What does watery cervical mucus mean? According to Dr. Shahin Ghadir, MD, a founding partner of the Southern California Reproductive Center, it's a good sign for those trying to conceive. "Profuse watery cervical mucus is usually a signal that ovulation is about to occur," he tells Romper in an exclusive interview. "This watery discharge allows the sperm to swim through the cervical canal and up into the uterus to help achieve pregnancy."

Estrogen, as always, plays into the equation. Ghadir elaborates. "At the time of ovulation, estrogen levels are usually at their peak. These higher levels allow for the cervical mucus to thicken and have that watery appearance. This begins your fertile window."

While the prime consistency for fertility and ovulation is egg white-like mucus, watery mucus is the first sign that the fertile window is opening. Thick and creamy mucus, on the other hand, indicates a decline in fertility as it hinders the sperm's ability to swim, and sticky mucus almost guarantees the sperm won't be able to get through the cervix. It all makes sense if you think about it; but then, who really wants to think about it?