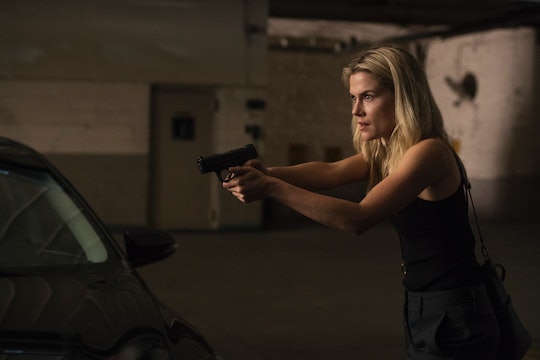 Trish Struggles With A Strange New Addiction On 'Jessica Jones'

Warning: Spoilers for Jessica Jones Season 2 lie ahead! Trish's history with addiction has always been present in Jessica Jones, but it wasn't until Season 2 that the show really dove deep into her struggles with substance abuse, when she started taking Simpson's inhaler and found herself addicted. So why would she start using a substance again? What does Will Simpson's inhaler do on Jessica Jones? It's at least understandable why Trish would start taking this stuff, though it clearly isn't good for her health.

In the first season of Jessica Jones, Trish Walker, child-star turned radio personality and Jessica's best friend/sister, started dating Will Simpson, an ex-military guy who tried to help the gang fight Kilgrave. About midway through the season, following an injury, a shady doctor from a company called IGH gave Simpson a red pill, an experimental combat drug that enhanced Simpson's endurance and made him basically immune to pain. It also seemed to alter his brain chemistry somehow, making him suddenly violent, aggressive, angry, and basically lacking in empathy. When he came after Trish and Jessica, Trish took one of the pills so that she and Jessica could fight him off, but it almost killed her in the process.

The two women left Simpson in Jessica's apartment, after which he kind of disappeared, before showing up again in Season 2, with a whole new performance enhancer, one that he inhales instead of taking a pill. Considering the fact that Trish has spent a lot of the time on the show being rescued by Jessica and talking about lifestyle topics on her radio show, it's completely understandable that she would want a power boost of her own, even knowing the risks. No one likes feeling helpless, especially when your sister is a literal superhero.

When Trish is first shown "powered up," the first thing that appeared different was that her sense of hearing was totally heightened. She heard people's footsteps from far away, and could hear every phrase they muttered under their breath as clear as day. It also became clear that she was totally looking for a fight. When she noticed a man with a suspicious outline under his shirt, she believed he was carrying a gun and followed him onto a bus to stare him down until he pulled out a book from the waistband of his pants. She finally got her chance to use her new powers when a guy groped a woman on the bus. Without missing a beat she swung from the handrail to literally kick him off the bus.

Her inhaler doesn't make Trish homicidal like the red pills did to Simpson, and it doesn't immediately send her to the hospital. But it does have negative effects. She began suffering withdrawal symptoms when she went awhile without taking a puff of the inhaler, getting extremely sick, groggy, and irritable, the way other drugs do to addicted people when they stop taking them. Malcolm, who'd recovered from his own drug addiction, eventually recognized the symptoms. So did Jessica, who remembered the last time Trish was addicted to drugs.

Trish spends a lot of the show playing second fiddle to Jessica, and it's natural that she would feel physically helpless beside her. This made her downslide into addiction and substance abuse totally believable, especially considering the fact that she'd dealt with addiction before.

Of course, this addiction also lead to her stuffing Malcolm in the trunk of her car and kidnapping Dr. Karl to make him give her powers. She'd dried out by the time Season 2 ended, but who knows how this experience has affected her. When she had the ingredients tested, a nurse also told her that the substance had harmful chemicals in it that could lead to organ failure, among other diseases. We'll have to see what comes next.