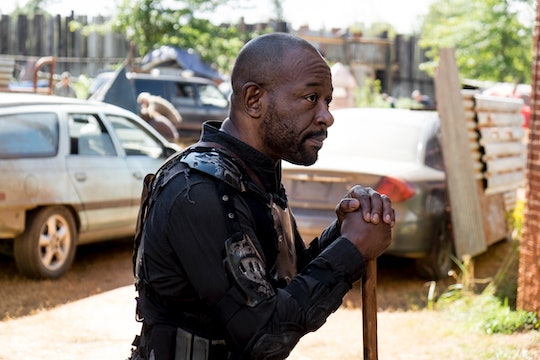 Morgan Is Having Mysterious Visions On 'The Walking Dead'

Morgan has been struggling to survive the zombie apocalypse since the earliest days of The Walking Dead, often consumed by the inner conflict of whether or not to kill to survive. That turmoil has often cost him his grasp on reality, something that seemed to be happening again in Season 8. He's been having visions of a man he saw get killed, but the man's message is particularly perplexing. What does "you know what it is" mean on The Walking Dead and why does Morgan's vision keep saying it?

The man Morgan keeps seeing is Gavin, the former Savior liaison to the Kingdom. Morgan had very nearly killed him in the melee of "Honor," but the situation unfolded in a way no one saw coming. Morgan was after revenge not only for all the damage the Saviors had inflicted, but because Gavin specifically had been involved in the death of a young Kingdom soldier named Benjamin; though he hadn't actually pulled the trigger, he had given the order. Ezekiel and Carol tried to get Morgan to show mercy instead of killing Gavin, so he wavered in the final moments — hesitating just long enough that Benjamin's little brother Henry decided to deliver the killing blow instead.

Morgan has been holding onto all the horrors he's witnessed, and that trauma seems to be manifesting in visions of ghosts. However, it was unclear what Gavin's ghostly message meant. It doesn't get any vaguer than "you know what it is," particularly without any hints about what "it" is even referring to. But Gavin's next line could be a little more illuminating, because he tells Morgan, "You were supposed to!"

That seems to be a reference to the fact that Morgan was going to kill him, but couldn't. Had he killed Gavin, Henry wouldn't have done it and the young kid's innocence would have been protected a little longer. Then again, the best option probably would have been for everyone to avoid killing anyone. Gavin may have been a villain, but neither Morgan nor Henry needed blood on their hands. Perhaps the "it" refers to the cause of Morgan's intense guilt: the fact that he keeps perpetuating the deaths of others.

It's just a guess, of course. The show seems to be putting more emphasis onto the negative consequences of the war, and how much the violence is wearing down the characters. Morgan has been navigating that for an especially long time and seems to have reached a breaking point, with Gavin's murder by Henry acting as the straw that broke the camel's back. Morgan has vacillated on killing people for seasons, going back and forth on his decision to abstain, but he can't go on like that forever.

There's a chance that "you know what it is" refers to Morgan knowing what he must do now. His guilt has become unbearable, so he has to take action of some kind. Fans know that he will soon be jumping ship and showing up on Fear the Walking Dead instead, and this arc seems to be setting up his departure. Maybe Morgan knows that the only way he can survive is to leave town.

Fans can speculate all they want on what Gavin's message means exactly, because "Do Not Send Us Astray" never makes the explanation explicit. Whatever it is must have a lot of meaning to Morgan even if the audience is in the dark, and it might become more obvious as the episodes go on. Morgan's story is leading somewhere this season, so Gavin's cryptic lines must be relevant even if viewers have no clue why just yet.