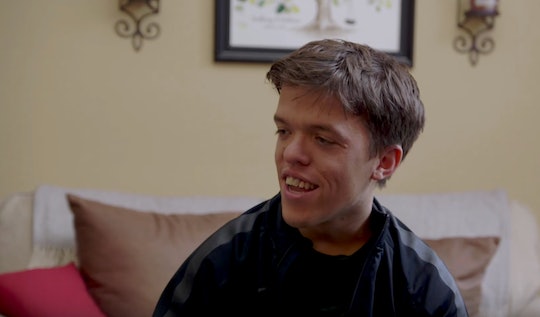 They wouldn't call it reality TV if it weren't real. Reality TV shows follow stars around as they undertake every day activities, living their lives just like every one else. Because of this, some reality TV stars opt to keep working their normal jobs, even while the cameras are rolling, in order to fully document everything — even the more mundane tasks. Little People, Big World star Zach Roloff, for example, grew up on camera right in front of our eyes and has undoubtedly experienced some major milestones in that time as well. But what does Zach Roloff do when he isn't filming his show? At the moment, the new father is keeping himself busy with his brand new bundle of joy.

On May 14, Zach and wife Tori Roloff welcomed their first child, a baby boy named Jackson, and the new parents seemingly couldn't be happier. In the weeks leading up to Jackson's birth, Zach was taking his job as a doting husband to Tori and dad-to-be seriously, helping out by taking the dog for a walk and even tying his wife's shoes, according to People.

Lucky for Zach, he definitely had all of the time in the world to devote to his wife — because, according to In Touch, Zach is a full time television personality. His show, Little People, Big World which documents his family's life, is currently in its 12th season on TLC. For someone who has been the star of a reality show for 10 years, this makes perfect sense.

But Zach also devotes a lot of time into one of his biggest passions, soccer. Zach is a youth soccer coach for Beaverton, Oregon soccer club, Tualatin Hills United, and has coached soccer with them for the past three years. According to the website, Zach has 10 years of experience coaching soccer, even organizing special charity tournaments to create awareness for dwarf athletics and devoting his life to one of his biggest passions while helping others. Zach finds coaching youth soccer incredibly rewarding as well, telling Lock Laces:

My most rewarding experience has been seeing all the kids that come back every year at tryouts. I love seeing the kids come back that I had the previous year, and it feels great that they want to come back and be a part of the same team and have me coach again. It means they enjoyed their experience and want to stay.

Zach's devotion to soccer and coaching kids proves he's already got this fatherhood thing on lock — and because of his jobs and flexible schedule, he will be able to devote as much time as he'd like to his little boy.