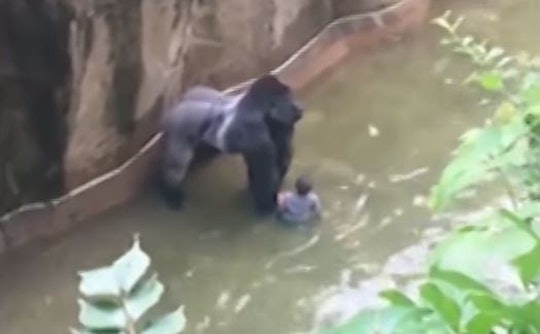 What Else Could The Cincinnati Zoo Have Done For Harambe The Gorilla? People Are Outraged

On Saturday, a 4-year-old little boy visiting the Cincinnati Zoo over the weekend crawled away from his parents and fell 15 feet into a gorilla exhibit. The whole thing ended with the sad death of 17-year-old silverback gorilla Harambe. The gorilla was shot and killed to protect the life of the boy. Now many are wondering what else the Cincinnati Zoo could have done for Harambe the gorilla, because there is no one person at fault.

That child's life was in danger. People who question that don't understand you can't take a risk with a silverback gorilla — this is dangerous animal. Looking back we'd make the same decision. The child is safe.

Maynard also told CNN that, in the 38 years the exhibit has been open, this is the first time anyone has gotten in.

But the public, horrified by the animal's death, wants someone to blame, and the boy's mother is taking a lot of heat for letting him get into the gorilla exhibit in the first place. Neither the Cincinnati police nor zoo officials blame the boy's parents, but there are plenty of others who disagree. A petition calling for "Justice for Harambe" places blame squarely on the boy's lack of "proper parental supervision" for the gorilla's death and has already received nearly 175,000 signatures. The petition calls for Child Protective Services and the police to hold the parents, Deonne Dickerson and Michelle Gregg, responsible.

And the public shaming of these parents appears to be just getting started. The Daily Mail published an article with an image of the parents and a detailed account of the father's criminal history. None of this matters to Harambe or has anything to do with the terrible events leading up to his killing, but the public wants a villain. Gregg posted a message on Facebook thanking everyone at the zoo for their quick action and to defend herself against accusations that she's a negligent mother, according to the Daily Mail, who recorded the message before Gregg deactivated her Facebook:

As a society we are quick to judge how a parent could take their eyes off their child and if anyone knows me I keep a tight watch on my kids. Accidents happen but I am thankful that the right people were in place today. Thank you to everyone that helped me and my son today....

Though the child was not hurt from the fall into the exhibit, Harambe dragged him around in the water repeatedly. Some say the gorilla wasn't acting aggressively, but the zoo said that Harambe's mood could've quickly taken a more dangerous turn.

Obviously the death of that beautiful gorilla is a tragedy. He was a gorilla just being a gorilla. Yes, it's terrible that the boy was able to crawl into the habitat, but once the huge, 750-pound animal had a hold of him, the zoo didn't have many options. Tranquilizers would have taken too long to take effect to slow down the gorilla, according to CNN, and zoo officials have said a dart or other stunning device may have just angered the animal and caused him to become violent.

Hopefully, once passions die down, so will much of the anger against a mom who took her eyes off her 4-year-old for a few seconds. And, as a mom, I know that the only thing separating Gregg from other parents who've lost track of busy little ones is luck and circumstance. So before Tweeting about how Gregg should be ashamed or before signing a petition calling for Child Protective Services to take her children, perhaps parents should think about the last time they had a heart-stopping moment where their kids momentarily wandered off. No parent is perfect.

As for the Cincinnati Zoo, I'm sure more than a few of its staff is devastated over the loss of Harambe. But one thing we've learned is that these habitats must be better protected. Primatologist Julia Gallucci said there should have been "a secondary barrier between the humans and the animals to prevent exactly this type of incident," she told the Daily Mail.

The good news is that the 4-year-old boy is fine, according to his mom, and expected to make a full recovery. Saturday's incident was a terrible accident that claimed the life of Harambe, but trying to avenge his death by punishing an injured boy's parents does nothing for animal rights — it only threatens human ones.