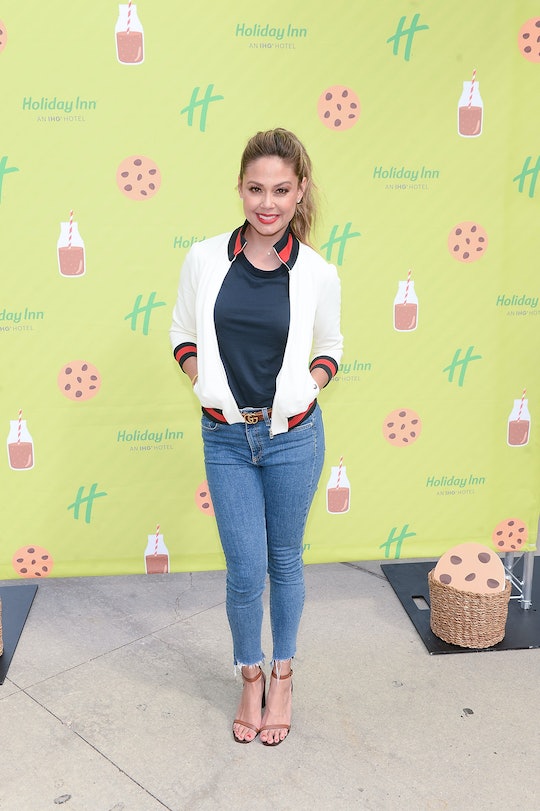 While you're checking your list ( and checking it twice), you're probably already indulging in everything the holidays offer. Whether it's gingerbread cookies straight from the oven, or a cup of hot cocoa by the fire, a great holiday movie wraps it all together in a neat little Christmas bow. One of those TV movies set to air soon, A Twist of Christmas, stars a familiar face. So, aside from the Lifetime flick, what else has Vanessa Lachey been in?

Formerly Vanessa Minnillo, Lachey was Miss Teen USA of '98, has been all about places like MTV's Total Request Live, Entertainment Tonight, and Top Chef. Aside from those spots — and according to her website — she's also had a slew of minor roles in shows such as How I Met Your Mother and CSI:NY as well as USA’s Psych and served as judge in the ABC reality show, True Beauty. As for film, Vanessa appeared in Fantastic Four: Rise of the Silver Surfer and Disaster Movie. Obviously Lachey's been busy. If you recognize her last name, it's because she married 98 Degrees singer, Nick Lachey in 2011 at Richard Branson's private island in the British Virgin Islands. Yup.

Marriage aside, Lachey's also mom to daughter Brooklyn and sons Camden and Phoenix — all under the age of 5. Basically, she's doing it all and looking flawless while she does it. At the moment, you can watch her as a judge on Universal Kids' Top Chef. The show was nominated for a 2018 Daytime Emmy award for Best Children's Series. She even cooks on the show, proving there's little she can't do. “It’s a perfect mesh for me — cooking, which I love, and young minds, which I love,” she told Entertainment Tonight. “I get so inspired by these young chefs. It’s definitely a dream job.”

She also spoke at length in the same interview about juggling it all and how much routine helps get things done while keeping the marriage fresh saying, “Every night I cook and he cleans up — that’s our deal! We talk about the day and funny things with the kids, pour a glass of wine, then sit down and watch something. We love Netflix! It still feels like I have my husband, instead of like we’re going through the day mechanically with breakfast, lunch, dinner. It can get that way with three kids. You wake up, get shot out of a cannon, then it’s go, go, go until they go to bed!”

Whether you've gotten all caught up on Vanessa's life and career or not, you can redeem yourself by tuning into A Twist of Christmas, premiering Saturday, Dec. 1 on Lifetime. According to the movie web page A Twist of Christmas is the story of when "two single parents — busy working mom Abby (Lachey) and her son, and overwhelmed lawyer Ryan (Brendon Zub) and his daughter, accidentally mix up their toys at a crowded department store. As a result, both of their Christmases appear to be ruined. Although the two can’t stand each other, the only way to get things back on track is to help each other salvage their holiday plans — not realizing they're falling for each other in the process." Sounds like a feel-good, family affair, so I'm in.

Vanessa Lachey is a force to be reckoned with, my friends. So whether you're only just discovering her, or a longtime fan, get on board like yesterday. For anyone old enough to remember TRL, you already know.