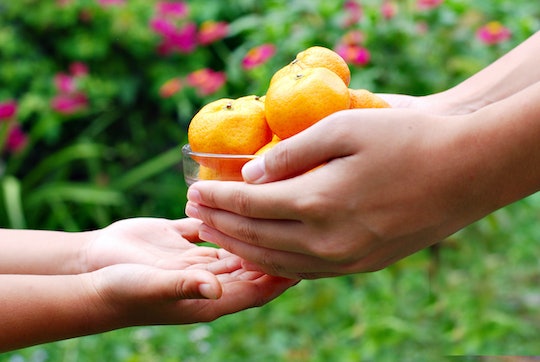 What Every Parent Needs To Know About Childhood Obesity

Conventional wisdom has long implied that being overweight or obese can present challenges not just to physical health but to mental health and emotional well being, too. Unfortunately, many of the metrics that physicians use to decide whether someone's weight actually means they are unhealthy are outdated. Despite this, these tools are still made available to the general public. What results is fat shaming and a dangerous stigma regarding any weight that doesn't look like something you would see in a fashion magazine, a message that is also, then, sent to kids. What every parent needs to know about childhood obesity goes far beyond the statistics. Yes, the CDC reported that in 2012 one-third of American children were overweight or obese, but how can a doctor tell if that label will actually impact a child's health?

There are many reasons why anyone, an adult or a child, may struggle with their weight. Weight fluctuates depending on lifestyle, growth, how much someone moves around in a given day, what kind of foods a person is eating, and regulatory mechanisms within a person's body that are outside of their control. Like anyone else, people who are "overweight" can be completely healthy, or, they can have health issues. So, how does a doctor decide if a child's weight is going to negatively impact their life?

How A Doctor Decides If A Child Is Overweight

Understanding how pediatricians reach the conclusion that a child is overweight or obese is an important first step. Doctors assess a child's growth and development by looking at a weight chart. These charts are used by most doctors to assess where a child's weight falls in comparison to most children their age. These growth charts also track how tall a child is at each appointment and can be helpful in diagnosing conditions where they might be growing more slowly than their peers. It's important to remember that all kids develop at different rates, and even the milestones fall within a spectrum.

BMI Scores Can Be Misleading — Especially In Kids

Pediatricians may also use Body Mass Index (BMI) formulas, which are often a component of growth charts. When used for children, BMI scores are calculated a little bit differently: they go by age and sex, which is important because as a child is growing, these two factors have a lot of influence over their weight. So, their BMI score will change frequently, and in accordance with these factors.

The problem with BMI scores in general — regardless of age, but especially when looked at in relation to older children and their respective sex — is that they do not factor in muscle mass. Muscle (which does not weigh more than fat but takes up a different amount of space in your body than fat) accounts for a certain amount of anyone's overall weight. But a BMI score doesn't discern between muscle and fat, so a person with a high BMI (even one that implies they are overweight) may actually be at a healthy weight because they have a healthy ratio of fat and muscle.

Another danger of BMI, along with looking at a child's weight irrespective of other lifestyle factors, is that a focus on numbers (which are deemed either "good" or "bad") can cause a child to stress out about a number. This number may become integral to their sense of self-worth, instead of focusing on other attributes, strengths, talents, and personalities, which are far better predictors of their success in school and out in the world than the number on the scale.

Times Have Changed, So Have Kids' Weights

It is true, however, that the food kids are eating, both at home and at school, isn't as healthy as it could be a lot of the time. Kids rely on the adults in their lives to provide meals and snacks and help them develop a positive attitude about food when they're on their own. But the easy availability of junk food — much of which is marketed directly to kids — and the cost of healthier alternatives means many families are relying on food that has more calories, more fat, and less nutritional value than their children need.

Children are also living in a world that doesn't demand as much physical activity, and many of the most popular forms of entertainment are sedentary pursuits, like watching television, playing video games, or using a computer. These two factors have likely contributed to the CDC's claim that there has been a rise in childhood obesity since the mid-1980s.

A Child's Weight Influences Their Health As Adults, But So Does A Lot Of Other Stuff

Some research has shown that there might actually be lifelong impacts on health if a child's weight is unhealthy. A study in the Journal of Gerontology showed that even after a child lost weight, the lasting effect on their metabolism had already been made. While many studies don't definitively prove that obesity causes disease, several long-term studies indicate that obesity can be a predictor of coronary atherosclerosis in adults, based on how their weight changed throughout their lifespan.

Weight increases and decreases do affect metabolism: a child's body is always striving to use up the calories that it takes in to provide energy. If they have more caloric energy in their body than they can use in a given day, it gets stored as fat. But it's important to remember that children do need some fat reserves — everyone does.

Overly Focusing On A Child's Weight Can Lead To Unhealthy, Even Deadly, Habits

When too much focus is placed on a child's weight, or parents "fat shame" their kids in an attempt to get them to lose weight, it encourages children to bully others (and themselves) about their weight. It may also encourage children to seek out unhealthy means to "fix" their "weight problem," such as extreme dieting or eating disordered behaviors, such as purging or restricting their food.

In the United States alone, 20 million women and 10 million men are recorded as having suffered from an eating disorder at some point in their lives, but the numbers may be much larger than that. Many who develop anorexia, bulimia, or binge-eating disorder report that the behaviors began when they were children or teens.

Initiatives like the Healthy At Every Size movement, seek to combat this trend into disordered eating in not just youth, but every age group, by promoting accurate reports of weight-related research and self-acceptance by celebrating body diversity and fighting back against the shame-filled stigma attached to weight.

A Real Health Concern? Overweight Kids Can Be Malnourished

It's important to remember that weight isn't the only indicator of health that doctors pay attention to. The truth is, a child who is underweight could be just as likely to have a health problem as a child who is overweight. Even children who are considered to be at a normal weight may be at risk for health problems due to poor diets — something that it's easy to forget when so much attention and focus is on what a person looks like and not how they feel.

Malnourishment and undernourishment are worldwide problems, but especially in lower socioeconomic brackets. Children can be underweight, at a normal weight or even overweight and still be malnourished. Malnutrition isn't always a result of not having enough to eat — although that is certainly one reason. Malnourishment also occurs when the foods that a child is eating day to day don't provide much nutrition, and therefore, their nutritional requirements aren't being met.

Parents should feel empowered to work together with their pediatrician to explore all aspects of their child's physical and emotional health without putting too much focus on their weight. Teaching a child to have a healthy relationship with food will empower them to make healthy decisions, have confidence in their abilities and ultimately, feel the best they can as they tackle the challenges of growing up.