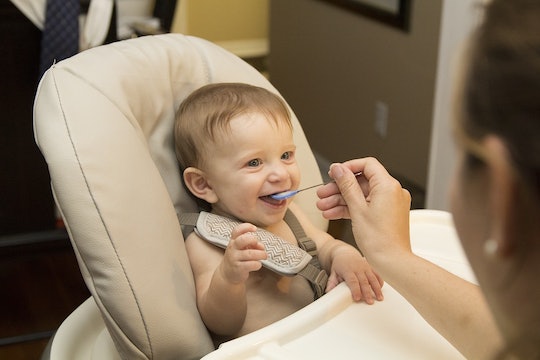 What Most People Don't Know About That Arsenic-Baby Food Study

A study released Wednesday found that many baby food products test positive for arsenic, and that includes 80 percent of the infant formulas tested. But the findings might not be as scary, or as researched, as they may seem. Every parent should know about that arsenic-baby food study, but they need to have all the information.

The Clean Label Project, the nonprofit advocating for transparent labeling that was behind the study, reportedly tested baby food, infant formulas, toddler drinks, and snacks purchased in the last 5 months, according to USA Today. After around 530 baby food products were tested, researchers discovered that 65 percent of products tested positive for arsenic, 58 percent for cadmium, 36 percent for lead, and 10 percent for acrylamide. Apparently, each of those chemicals could be dangerous to developing infants.

Some of the more popular brands included in the study were Gerber, Enfamil, Plum Organics, and Sprout, and they were among the worst offenders, according to The New York Daily News. But before parents across the country get out their pitchforks and storm the offices of Gerber or Enfamil, a little more research and consideration may be necessary. It can be easy to look at numbers like that and react strongly, but let's look at the facts.

The Clean Label Project reportedly did not publish its research for this study in a peer-reviewed journal, according to Snopes. Peer review is the "process of subjecting an author’s scholarly work, research or ideas to the scrutiny of others who are experts in the same field," according to The Journal of the International Federation of Clinical Chemistry and Laboratory Medicine. Snopes noted that without peer review, the Clean Label Project's research hasn't gone through expert inspection that is usually necessary for this sort of research to be considered "methodologically sound."

Additionally, without publication in a peer-reviewed journal, the names of researchers or authors behind the study do not need to be disclosed. Neither do possible conflicts of interest, according to Snopes.

Several outlets noted that because the study was not published in a peer-reviewed journal, its research quality hasn't been examined by outside scientists. But that fact hasn't been scrutinized for the problem it presents when it comes to accepting the study's findings.

Essentially, other experts in this field have not been able to weigh in on whether the Clean Label Project's findings are sound, and there's not currently a published way to determine whether there were any potential conflicts of interests of biases involved in the research or the results. That alone should make parents pause.

It is important for consumers to understand that some contaminants, such as heavy metals like lead or arsenic, are in the environment and cannot simply be removed from food.

Even the World Health Organization reports that arsenic is a naturally occurring component, and can sometimes be found in a less toxic organic form.

Romper reached out to The Clean Label Project regarding whether the nonprofit has any additional information about the data collected in the study, and whether it is in the process of having the findings of the study published for peer review, and it awaiting a response.

Plus, this isn't an issue that government agencies aren't already paying attention to. For instance, the United States Food and Drug Administration's Total Diet Study already analyzes the levels of different potentially harmful chemical elements and industrial contaminants in a large range of food items.

In particular, the FDA’s 2006-2013 study of toxic and nutritional elements tested for arsenic, cadmium, and lead, just like the Clean Label Project did. In just 9.16 percent of baby food samples, there were "trace" levels of arsenic, which generally means between 10 and 40 parts per billion, according to Snopes. That sounds a little different than 65 percent of products, and "trace levels" sounds a lot less scary than "unsafe levels of arsenic."

Without specific data about the study — such as the levels of contamination found in the analyzed samples — or review by other experts, it might not be time to panic about the presence of arsenic or other chemicals in baby food just yet.

Of course, no one is saying you should ever feed your baby these chemicals in levels that are known to be unsafe. But the evidence provided doesn't prove that the levels the Clean Label Project found are unsafe. And until that happens, throwing out all your Gerber containers might be a premature reaction to the study.

More Like This
What Is Monkeypox & Should You Be Worried? Here’s What You Need To Know
Two Young Children Have Been Hospitalized Because Their Formula Is Out Of Stock
Why Is My Vaginal Area Dark?
Reddit Is Stunned By Mother-In-Law Trying To Breastfeed Her Granddaughter