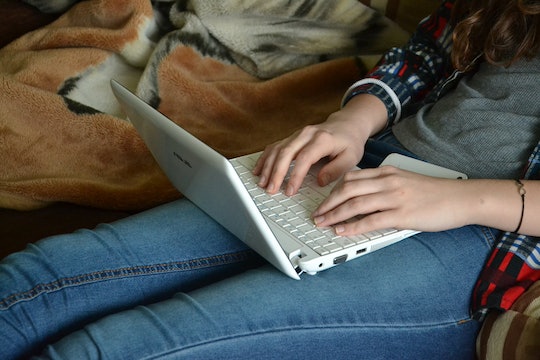 What Parents Should Know About The “Blue Whale" Game

In the wake of such shows like Netflix's graphic drama about teen suicide, 13 Reasons Why, and rapper Logic's powerful early summer song, "1-800-273-8255" (the phone number for the National Suicide Prevention Lifeline), children and teens struggling with depression can find a wide variety of narratives about the issue of suicide. These same kids can also find disturbing content online encouraging them to act on suicidal ideations, as more than one family has discovered recently after their teen children died by suicide. The sinister catalyst believed to be the inspiration for these teens is the "Blue Whale" suicide game — and here's what every parent should know about it.

On July 8, 15-year-old Isaiah Gonzalez was found by his father, having died by suicide in their family home in San Antonio, Texas; the teen had broadcast his completed attempt online via a cellphone propped up on a shoe, according to The Washington Post. Another family in Georgia lost their 16-year-old daughter Nadia to suicide in May, as CNN reports; the family requested that CNN protect their daughter's identity by not revealing their last name. In both cases, the families point to the "Blue Whale" game as the culprit, an online "game" that encourages participants to engage in a gauntlet of macabre "challenges" that ultimately culminate in a completed suicide.

The exact challenges that make up the game aren't what matter, and I won't cover them here simply because it's irresponsible to spread the methods of the game — but it is important for parents to know that the Blue Whale game is out there being talked about and shared across social media. Whether the Blue Whale game is a hoax or not doesn't even matter, either: with at least two teen suicides in the United States being attributed to the game, it's gaining attention and traction. There's enough established concern at this point that several U.S. school districts are warning parents about the Blue Whale game.

In the case of Nadia, CNN reported that after her death, her brother began to find signs pointing to the Blue Whale game in her artwork. That doesn't mean as parents, we should be scouring every detail of our children's artistic works for signs pointing to depression or suicidal ideation. It also doesn't mean we need to be covertly monitoring their social media presences, either.

But what the Blue Whale game does is highlight the precarious level of susceptibility to which depressed or suicidal people are predisposed — and that it's more important for parents to recognize the broader warning signs of suicide in teens than the specifics of what amounts to an online urban legend. According to the National Suicide Prevention Lifeline, parents should be on the lookout for the following warning signs, especially if the behavior is new or increasing in frequency:

Other physical behaviors, such as increased or decreased sleep, extreme mood swings, and the increased use of alcohol or drugs are easy to write off as simply the realities of being a teen in America; however, when seen in tandem with any of the above warning signs, it's critical for parents to intervene for their child's health and safety.

It can be "easy" for parents to search for meaning and blame in the wake of a child's suicide — and something as sensational as the "Blue Whale" game certainly fits the bill. But the reality is that an online game is a distraction from the bigger crisis of rising teen suicide rates in America. For parents, yes, the Blue Whale game is out there — but there are much more overt and urgent signs that your suicidal child needs your help.