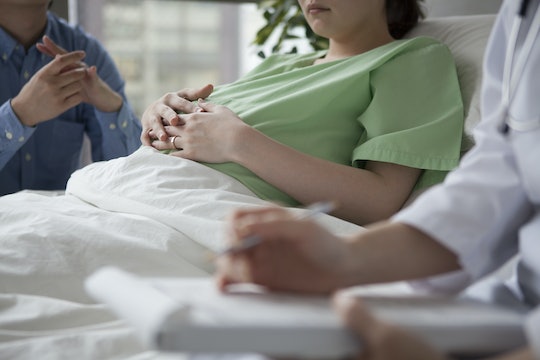 Childbirth is a messy process involving just about every bodily fluid imaginable. Some of these fluids are a cause for concern among a contingent of doctors across the U.S., and they allay that concern with urinary catheterization. It sounds like a scary, big deal, right? But what every pregnant woman needs to know about getting a catheter during childbirth may surprise you.

The first thing there is to know is that urinary catheterization (Foley) is typically paired with childbirth wherein an epidural is ordered, but not always, according to The Journal of Medical Engineering and Technology. While it is still standard operating procedure to order an indwelling urinary catheter for women who are undergoing a C-section, it's not as common anymore for women giving birth vaginally who have opted for an epidural. There is emerging evidence that the risks of complications surrounding urinary catheters outweigh the benefits, and those risks include urinary tract infection, bladder infection, and increased urinary incontinence. (Because I don't pee enough when I sneeze already.)

So why would they put in the foley to begin with if there are so many possible side effects? According to BJA: British Journal of Anaesthesia, they were/are placed because an epidural can inhibit a woman's ability to drain her bladder on her own, causing the bladder to distend into the area of the womb, and slow labor. There aren't many women out there willing to go through a slower labor, so of course everyone would jump in the cath-car to free the pee.

While I did not have a foley during my deliveries, I did have one postpartum with my son. He was a compound presentation, meaning he came out fist first. He literally tore me a new one — my yoni was more swollen than an overstuffed Chipotle burrito, so peeing on my own wasn't happening. I remember the feeling of the foley being placed and hating every minute of it, but it wasn't because it was super painful — I'd gotten the strong drugs at that point — but because it felt so very alien.

At that time, I knew the risks associated with foley insertion and I couldn't have cared less — I just wanted relief. But for everyone else staring down childbirth, what every pregnant woman needs to know about getting a catheter during childbirth is complicated.

You need to know it is policy to insert foleys for every medicated birth at some hospitals. While the number of hospitals and doctors requiring this is dwindling, they still exist, and not just in rural areas. Your provider will know policy, so ask them if you're concerned. Also, I called nine different hospitals across the U.S., and didn't find a single one who didn't insert a foley for a C-section. It's as much for safety and convenience as anything in a surgical environment.

Think about it — you don't want to sit on a bedpan or in your own urine on the table. Also, it can interrupt a delicate surgical procedure. Don't worry, according to Harvard University, this is typically done under anesthesia. They'll clean your undercarriage using an iodine solution and drive the tube to urinetown, without you being any the wiser.

They might cath you more than once, too. According to BJA, doctors have two options: an indwelling catheter attached to a bag that continuously collects urine during the delivery, or intermittent catheterization that is used periodically throughout labor or as needed. There are risks with both, but the latter diminishes the risk by decreasing the amount of time the foley is inserted. The chief concern, according to the Cochrane Pregnancy and Childbirth Group, is urinary tract infection, longer hospital stay, and incontinence.

While the risks of infection are low, according to the American Journal of Maternity and Child Nursing, so are the benefits of catheterization in epidural assisted vaginal births, noted the same study. If you want to avoid the use of urinary catheterization during your labor, talk to your provider and make sure you're on the same page. I will tell you, while I didn't love the insertion of the cath, the sweet, sweet relief I felt afterward was one of life's true gifts.

More Like This
Mom Gives Birth To Record-Breaking 16-Pound Baby
What Foods Fight Nausea During Pregnancy?
OB-GYNs Explain The Connection Between Stress & Miscarriage
Diastasis Recti Exercises You Can Do At Home To Heal Your Abdomen
What Parents Are Talking About — Delivered Straight To Your Inbox