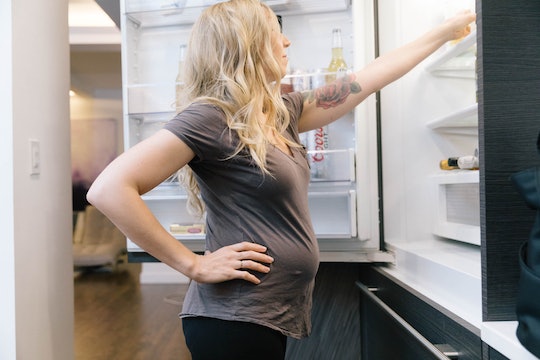 You Can Eat More Fish During Pregnancy Than You Thought, According To Experts

I’m a big-time rule follower. Call it my Type A personality or tendency toward being teacher’s pet, but when it comes to adhering to guidelines, I’m your girl. And pregnancy simply meant upping the ante. When my doctor encouraged me to watch my heart rate during my regular running routine, I bought a monitor. When I was advised to sleep on my left side, I made the change to my least favorite position. But I also learned that some rules, like completely nixing caffeine, had wiggle room. When it came to what fish is safe to eat during pregnancy, I discovered it was less about ignoring warnings related to consuming fish during pregnancy and more about choosing the right ones.

Hill says tuna should also be limited to 6 ounces per week, or two small cans per week. As for sushi, she says it is safe to eat as long as it does not contain any of the fish previously mentioned. “Sushi-grade fish is flash frozen, which kills parasites, making sushi one of the least common sources of food-borne illnesses,” Hill says. “However, you should not consume raw fish from the supermarket that is not designated as ‘sushi-grade.’”

Dr. Rebecca C. Brightman, a NYC-based OB-GYN and assistant clinical professor at the Icahn School of Medicine at Mount Sinai, tells Romper that, despite popular belief, women should have fish two to three times per week during pregnancy. “Fish is an excellent source of Omega-3 fatty acids, particularly DHA which is important for fetal brain development,” she says.

Brightman says in addition to canned light tuna, shrimp, salmon, cod, and tilapia are excellent choices for pregnant women. She also advises that when it comes to freshly caught fish in local bodies of water, pregnant women should check local advisories from the United Stated Environmental Protection Agency (EPA).

In addition to Omega-3 fatty acids, double board-certified OB-GYN and Maternal Fetal Medicine specialist Dr. Kecia Gaither tells Romper seafood contains other nutrients, such as protein and zinc, that are valuable to fetal brain development. She also touts the benefits of anchovies, sardines, and trout.