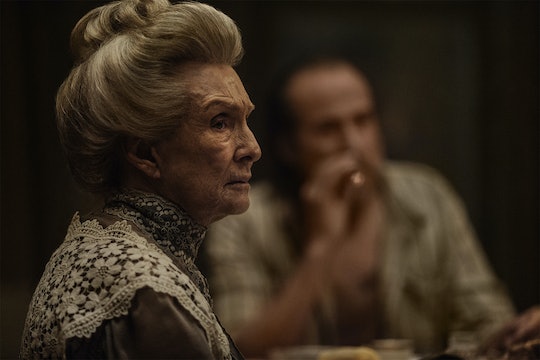 There are plenty of familiar faces starring in Starz's latest series American Gods, an adaptation of the Neil Gaiman novel of the same name. In the center of the action is Ian McShane (of Game of Thrones and Deadwood fame, to name just two) as the Old God known as Mr. Wednesday, who introduces protagonist Shadow Moon to the world of the deities. But beyond McShane, there are several other esteemed actors appearing on the show — like the award-winning prolific stage and screen actress, Cloris Leachman. But what god does Cloris Leachman play on American Gods?

The 91-year-old American actress has a career spanning nearly 70 years. American Gods marks her latest TV project (one of many). On the new show, she plays Zorya Vechernyaya, the America-based incarnation of a Slavic deity introduced in the second episode, "The Secret of Spoon," airing Sunday, May 7. She's one of a group of Slavic gods/goddesses visited by Mr. Wednesday and Shadow Moon during their trip to Chicago. In the novel, there are three sisters (all named Zorya) living in the rather decrepit brownstone along with Czernobog (played by Peter Stormare) , a man (aka, god) that Zorya Vechernyaya describes as a "relative" in the recently released Leachman-centric preview of the upcoming episode. Zorya Vechernyaya's sisters are Zorya Polunochnaya (played by Erika Kaar) and Zorya Utrennyaya (played by Martha Kelly).

Unlike characters such as Mr. Wednesday, who have "code names" that obscure their "true" godly identities, each of the three Zoryas have retained the exact names that correspond to their mythological origin. In TVLine's casting announcement for Leachman, Zorya Vechernyaya is described as "the eldest of three sisters who watch over the constellations, guarding against horrors forgotten by modern man."

As seen in the promo, she doesn't know how to cook well and is unapologetic about it, citing the fact that in the old country, they used to have servants to do the cooking. In Chicago, the sisters and Czernobog are decidedly more down on their luck. At one point in the book, Zorya Vechernyaya even badgers Mr. Wednesday to give her an extra $40 so that she can feed him and Shadow during their visit. By the looks of the episode photos, she also enjoys drinking. #BottomsUp.

Interestingly, there are only two Zorya (or "Zorja) in Slavic mythology, where they are also known as the Auroras. Zorya Vechernyaya, specifically, is the Evening Star, while Zorya Utrennyaya is the Morning Star. In the world of American Gods, Zorya Polunochnaya is the Midnight Star and was created by Gaiman for his book, according to the author's 2011 interview with Patton Oswalt.

The Zorya aren't major or frequently-featured characters in the novel, so it will be intriguing to see whether (and, if so, just how much) the showrunners expand their roles in the series.