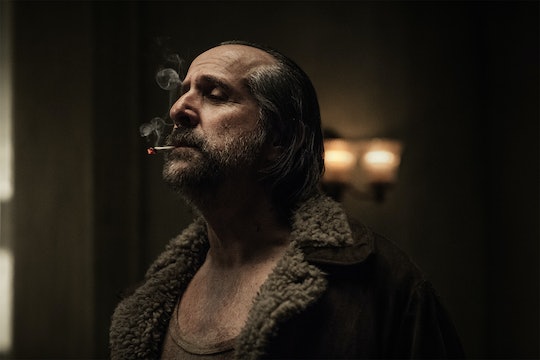 Czernobog May Stir Up Trouble On 'American Gods'

American Gods' gradual introduction of its diverse pantheon of gods means that viewers have plenty of interesting characters to look forward to meeting week after week. As Shadow Moon and Mr. Wednesday travel across the country on Wednesday's mission to recruit fellow Old Gods to his side in the fight against the worship-usurping New Gods, more and more iconic figures from the novel will be introduced. On the upcoming second episode, the show is set to introduce several important characters from the book, like Czernobog, when the duo visits Chicago. But what god is Czernobog based on?

In TVLine's American Gods casting announcement, Czernobog (played by Peter Stormare, also of Fargo and Prison Break) is described as the "Slavic god of darkness and evil." The official Starz character description also notes that Czernobog is reluctant to join the fight against the New Gods, given that he's "wary of Mr. Wednesday's motivations." In the description for Sunday's upcoming episode, "The Secret of Spoon," it's clear that Czernobog's introduction will be a major part of the story — it mentions that Czernobog will play "a high stakes game of checkers" with Shadow Moon. That checkers game is shown in the preview photos released for the episode, where Shadow looks pretty intense and concentrated playing against a greasy, dirty, wifebeater-wearing Czernobog.

The reason for the unusually high stakes of what's typically a pretty chill board game is made clear in the episode clip preview for "The Secret of Spoon." Specifically, as it turns out, the two have made an intense wager on the outcome of the game. If Shadow wins, Czernobog has agreed to join Wednesday's fight against the New Gods. If Czernobog wins, he gets to knock Shadow's brains out with his giant hammer. In the book, the American incarnation of the Slavic god explains that he once worked in the meat business knocking cows dead before they were to be butchered. So, he's pretty skilled with that hammer — to say the least.

In Slavic mythology, this particular god is an interesting one. Though Starz has described him as "the god of evil" in promotional material (like in his character promo video), Czernobog (also spelled "Chernobog") literally means "black god" and it's unclear exactly how evil/malicious the ancient Slavs considered him to be. His counterpart is Belobog (spelled "Bielobog" in the American Gods novel), a god of goodness and light, who was said to fight Czernobog twice yearly for control of the seasons. Czernobog and Bielobog represent duality in Slavic mythology.

Bielobog is mentioned in the book, but it's unclear just how much viewers will see of him in the upcoming show. Regardless of how evil or not evil the original mythological figure of Czernobog was, pop culture has definitely decided that he's a bad dude — he also appears in the Disney movie Fantasia, as the demonic and terrifying gargoyle creature of many a kid's nightmares.

More Like This
What You Need To Know About Snapchat’s New Parental Controls
The Worst Fake Babies In The History Of Movies & TV That Will Always Be Unsettling
What Parents Need To Know About Hulu's Predator Prequel Prey
10 Cozy, Romantic, & Drama-Filled Shows To Watch If You Love 'Virgin River'