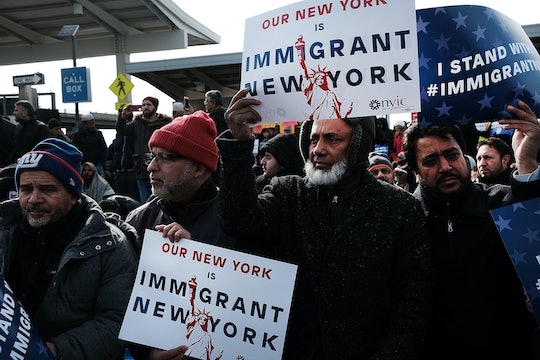 What Green Card Holders Should Do Next

The first few weeks of the Trump administration have been somewhat tumultuous, to say the least. After signing an executive order that prevents people from seven Muslim majority countries from entering the United States, protests in support of refugees erupted across the country. A federal judge in Seattle, Washington — U.S. District Judge James Robart — issued a temporary restraining order against the executive order on Friday, halting the order temporarily. Now that the travel ban has, for the moment, been stopped, many green card holders are wondering what they should do next.

Right now, immigration lawyers are suggesting those who hold green cards — many of whom suffered setbacks under the immigration ban despite being in the United States legally — seek citizenship as soon as possible. Those who have held green cards for a minimum of five years and are at least 18 years of age are eligible to start the naturalization process. Some can seek naturalization after just three years if they are married to a citizen.

While many green card holders never choose to become full citizens, these uncertain times may make them reconsider. Becoming a naturalized citizen is a (supposedly) guaranteed protection against deportation — because despite Trump's executive order being temporarily blocked, he's still in the White House for the next four years. Vice President Mike Pence also recently told Fox News that the Trump administration is "going to continue to use all legal means at our disposal to stay that order and move forward to take the steps necessary to protect our country." ‌

Immigration lawyers are encouraging permanent residents to apply for citizenship as soon as possible. The naturalization process can take up to six months, so the sooner action is taken the better. Becoming a naturalized citizen is a move that will help work to keep immigrant families together during the Trump presidency. According to The Columbus Dispatch, permanent U.S. residents and green card holders were held at the border during Trump's travel ban. Immigration lawyer Jessica Rodriguez told the outlet that she even had a client questioned at the border for hours and he wasn't even from one of the seven countries included in the ban. She told The Dispatch that she believes "Trump is a time bomb. We're telling people, 'If you have your time in and are eligible, do it now.'"

If the new administration is able to reinstate the executive order that prevents immigrants from Syria, Somalia, Libya, Yemen, Sudan, Iraq, and Iran from coming into the country, it could separate families once again, forcing legal residents to scrap any visits overseas.

Regardless of all the chaos, there are a few bright spots. People across the country are going the extra mile to help permanent residents become naturalized citizens. Fran Green, a Columbus resident who oversees naturalization ceremonies, told The Dispatch that Citizenship and Immigration Services has asked her to schedule "enough ceremonies through April to handle twice as many people as usual."

Though our president is determined to make it virtually impossible for those hoping to come to the United States to enter the country at all, it's comforting to know that our citizens are so willing to help each other in this time of need. For those who are able, make use of the current opportunities as soon as you're able, before it's too late.

More Like This
The President Of Ireland Wants To Get Rid Of Homework & Honestly, He's Onto Something
Winter Travel Tips For Families
The Best Travel Tips For Solo Parenting
How To Fly Safely During Pregnancy
What Parents Are Talking About — Delivered Straight To Your Inbox