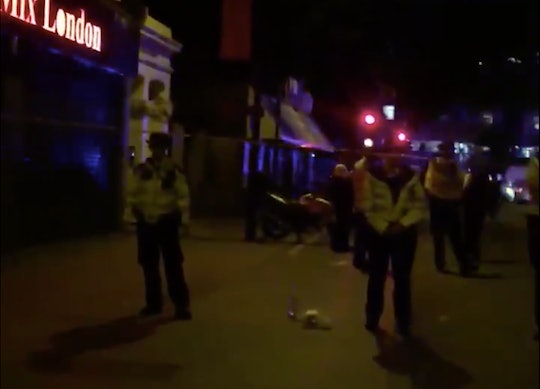 UPDATE: Shortly before 5 a.m. local time, Metropolitan Police issued a statement confirming the number of fatalities and casualties stemming from Monday's incident. "One man was pronounced dead at the scene. Officers are in the process of informing next of kin. A post mortem examination will be scheduled due course," spokespersons wrote. "Eight people injured were taken to three separate hospitals; two people were treated at the scene for minor injuries. ... The investigation of the incident is being carried out by the Counter Terrorism Command." Authorities stated that one 48-year-old man had been arrested and was in custody awaiting assessment.

EARLIER: Several witnesses claimed that the alleged driver of the van had been intentionally targeting worshippers leaving evening prayers, though authorities had not confirmed as much at the time of publication. A short time later, the London Ambulance Service issued a statement saying that it had dispatched crews to the scene just after midnight local time.

"We were called at [12:15 a.m.] to reports of a road traffic collision at Seven Sisters Road. We have sent a number of ambulance crews, advance paramedics and specialist responses teams to the scene," spokespersons wrote. "An advance trauma team from London’s Air Ambulance has also been dispatched by car. We are working closely with other members of the emergency services at the scene."

Our priority is to assess the level and nature of injuries and ensure those in the most need are treated first and taken to hospital. More information will follow when we have it.

According to a Metropolitan Police statement, there were "a number of casualties being worked on at the scene." At least one person had been arrested, although officers did not release that person's identity.

Several witnesses on the scene began posting video and photos in the immediate aftermath, with much of the footage showing a number of individuals lying on the pavement.

"Everyone was shouting 'a van's hit people,'" one witness told BBC News reporters. "There was this white van stopped outside Finsbury Park Mosque that seems to have hit people who were coming out of the mosque after prayers finished."

"This was a BLATANT Islamophobic attack," one witness claimed, posting video from the scene of bystanders seemingly assisting those injured and holding items of clothing against their wounds. (Police have not yet confirmed whether the incident was an act of terror or unintentional.)

Several outlets claimed early on that there were at least seven casualties, although emergency responders could not immediately confirm that number.

A short while later, the Muslim Council of Britain issued a statement on Twitter, which read,

We have been informed that a van has run over worshippers as they left #FinsburyPark Mosque. Our prayers are with the victims.

The group also quoted a tweet from its secretary general, Harun Khan, which claimed that the incident had been intentional.

"Shocked and outraged to hear a van has intentionally run over worshippers leaving #Ramadan night prayers on Seven Sisters Road," he wrote, tagging the tweet, "#FinsburyPark."

As of 10 p.m. Eastern Time (3 a.m. local time), no details behind the actual collision had been released.