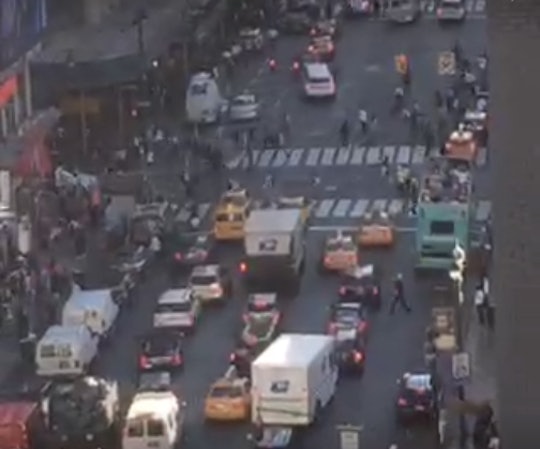 What Happened At Penn Station? A Man With A Cleaver Was Killed After Attacking Officers

At the after-work rush today at West 32nd Street and Seventh Avenue, there was a huge commotion involving multiple police officers and a violent suspect, leaving many metro travelers and bystanders to wonder, " What happened at Penn Station today?" At around 5pm, a man with a meat cleaver was killed after attacking multiple New York City Police Officers, striking one of the officers in the face.

Five officers are believed to have been involved with the incident. The officers were responding to a call about the man and his weapon. When the officers approached the suspect, he began to run away and a chase ensued.

The struck officer was taken to Bellevue Hospital and his injuries were not life-threatening, a source told NBC New York. Another officer was hit by one of his fellow officer's bullets and was rushed to the hospital as well. The source also notes that the other officers were taken to the hospital, only "to be evaluated for trauma."

Cops opened fire on the suspect, who has been identified as 32-year-old Akram Joudah of Queens by two law enforcement officials. Reports insist that Joudah was shot multiple times. He, too, was taken to a local hospital and multiple sources, including The New York Post, report that the suspect is now in critical condition. Joudah has been arrested 15 times times prior to this terrifying incident; On Aug. 27th of this year "he was found carrying knives near a synagogue." Police sources report that Joudah was an "emotionally disturbed person."

In light of the attack, police have since shut down West 32nd Street between Sixth and Seventh avenues to all vehicular traffic in order to secure the area. An official also reported that agents from the FBI's Joint Terrorism Task Force were sent to the scene as an extra precaution.

Users on Twitter report that multiple police helicopters began circling around the scene in Midtown Manhattan after the attack and subsequent shooting. Witnesses on the scene first heard the rapid gunfire, then "saw somebody detained on the ground," Cory Melton told The Wall Street Journal. Franchesca Benitez, manager at nearby clothing store Mandees, told The New York Post: "We heard the gun shots and saw all these cops running and then we all ducked down and went into lockdown mode."

Motives for Joudah's attack are unclear as of now. The Daily Mail reports that, after the fact, investigators were seen inspecting Joudah's car, including multiple suitcases that were found inside of it.