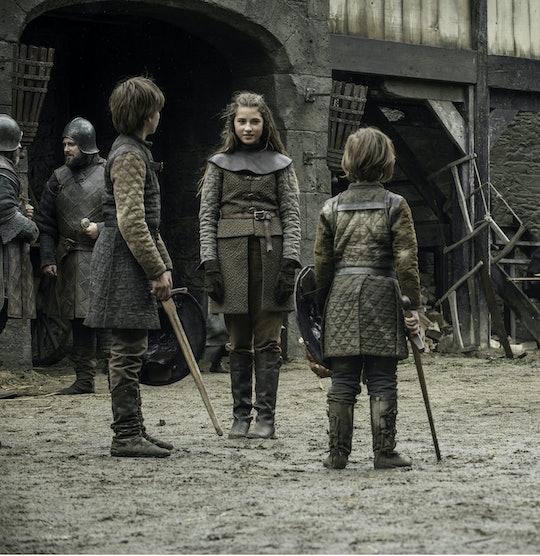 What Happened At The Tower Of Joy In The 'Game of Thrones' Books? A Theory May Be Proven

The theories about Game of Thrones are endless but if you haven't read the books, you may not understand all of them. After last week's shocking ending, people were very excited to see the preview for the next episode. Based on the post-Jon-Snow-is-alive episode, it looks like we'll be getting another flashback, but this time it'll be with a slighter older Ned Stark at what looks to be the Tower of Joy. So what exactly happened at the Tower of Joy in the Game of Thrones books?

If you haven't read the books you may have no idea what the Tower of Joy is yet, and that's totally fine. It hasn't been heavily discussed on the show, if at all, but it is important to a lot of fan theories, mainly the R+L=J theory, which is the idea that Jon Snow isn't actually Ned's son, but his nephew. But before we get into the theories let's get down to the facts.

In the books, the Tower of Joy was a round tower in Dorne and was named by Prince Rhaegar Targaryen, Danerys' brother and the abductor of Ned's sister, Lyanna, who was also betrothed to Robert Baratheon. Lyanna's abduction is what led to Robert's Rebellion and the war. Basically, Lyanna was kind of the Helen of Troy in Westeros.

After the war ends and the Targaryens are deposed, Ned, along with six of his companions go to the Tower of Joy. When Ned and friends get to the Tower they find it guarded by three members of the Targaryen Kingsguard who they face off with. Ned and his friend, Howland, are the only survivors of the fight, and when Ned goes into the tower he finds Lyanna in a "bed of blood," dying. She asks Ned to promise her something before she dies and he agrees. It's unknown what Ned promised Lyanna or what caused her death. Hence all the theories.

Most, if not all, Game of Thrones fans believe that Lyanna died because of childbirth and the promise she made Ned was to raise her son as his own because Rhaegar Targaryen was the baby's father. Robert was killing all Targaryens and Lyanna knew if her son was discovered he would be killed too. Thus, the theory is Jon Snow is actually the son of Rhaegar and Lyanna (R+L=J).

If the next episode of Game of Thrones actually shows what really happened at the Tower of Joy it seems one of the book and show's greatest fan theories will finally be proven...or disproven.