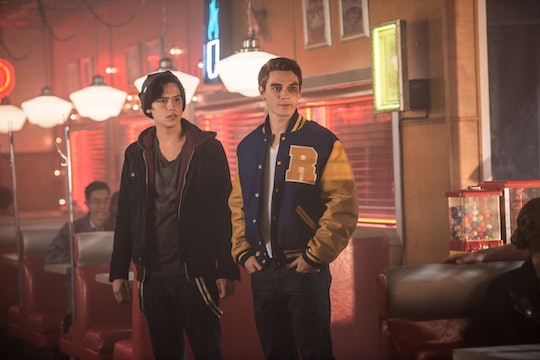 This 'Riverdale' Friendship Is On Shaky Ground

Though it's true that I wasn't an avid reader of the Archie comics, I am already significantly invested in The CW's Riverdale, a show that is loosely based on said comics. And while the series is vastly different from it's printed counterpart (like this whole murder mystery thing), there is one significant detail about the show that truly has me stumped. I'm referring to the rift that has grown between Archie and Jughead, both of whom as supposed to be close friends. And yet, for some reason they aren't. So what happened between Archie and Jughead on Riverdale? These former BFFs are definitely on the rocks.

Jughead, who only showed up for the final 10 minutes of the premiere, has yet to give viewers much insight into his side of things, preferring to talk about everyone else in town rather than himself. But during his brief interaction with Archie, it was evident that something happened to make their friendship run afoul. It happened when Archie lamented to Jughead about how he feared his friendship with Betty was in jeopardy. That's when Jughead told him that that best approach would just to be open and honest with her about how he's feeling. He then added that a similiar tactic could've saved their friendship as well, though he failed to disclose any further details about the incident.

But evidently, that's a secret that's been kept under wraps for now, even from the cast itself. During a recent interview with ScreenerTV, K.J. Apa, who plays Archie, admitted that he still has no idea what caused the animosity between these two characters. "There's obviously something happened between the two of the them, it hasn't yet been established what that was. I don't even know yet, but I'm guessing it was something that was really bad," Apa explained to the site. "They still haven't completely gotten over it — it's episode seven and we still haven't completely gotten over it — so when that comes out it’s going to be massive."

So don't expect this question to be answered anytime soon. In the meantime, we'll just have to wait and see how these two characters attempt to restore that friendship to its former glory. As morbid as it seems, perhaps Jason Blossom's death and the mystery behind his killer will end up being the thing that brings these two comrades back together. It's strange what can happen during times of grief and perhaps these two will realize that they have bigger problems to worry about these days.