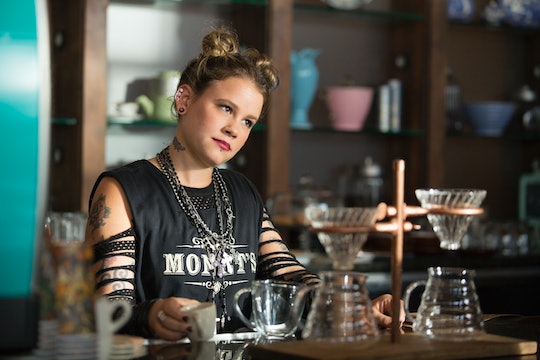 Clay & Skye Have A Complicated Past On '13 Reasons Why'

(Warning: minor spoilers from Episode 11 ahead!) Although Netflix's new series 13 Reasons Why is about Hannah Baker's 13 reasons for ending her life, the show is also very much about Clay Jensen, who listens to her tapes. While Clay gets taken back to the past with Hannah's tapes, what he hears also begins to affect his present day life and how he sees people, like his former friend Skye. So what happened between Clay and Skye on 13 Reasons Why?

From early on it has been clear these two have a history. Skye talked about a time when they used to be friends and it's obvious Skye knows Clay well. When Clay finally listened to his own tape, he took a break with Tony to go get food from Monet's where Skye worked. It turned out they go way back and not only were they friends, they were more like best friends. However, when they started high school, their friendship fell apart and they both seem to blame the other for it.

Clay said Skye stopped talking to him, but Skye insisted that when they returned to school it was Clay who didn't say hi to her in the halls, apparently because she looked different. Skye had piercings and tattoos, and one has to assume that's the change Clay was referring to. Their trip down memory lane only became worse when Skye then started to talk about Hannah's death and how everyone in high school has problems and Hannah just couldn't deal.

Clay then grabbed Skye's wrist, turning it over to reveal scars from where Skye cut herself and asked her if that was how she "dealt with it." Skye replied yes and that suicide was weak. Unsurprisingly, Clay left pretty upset, feeling as though Skye had no right to talk negatively about Hannah since Skye had no idea all that she went through.

It's obvious to probably everyone but Clay that Skye had feelings for him and that she was, in fact, jealous of Hannah and Sheri. One has to hope that Clay won't make the same mistake twice and will finally have a real conversation with Skye about their past friendship and become friends again, and possibly more.

For now though, it looks like Clay still only has his thoughts on Hannah, but to be fair, he still has two more tapes to listen to, not to mention the impending lawsuit against the school that he's now definitely apart of. Hopefully, once things settle down, Clay and Skye can try to be friends again.