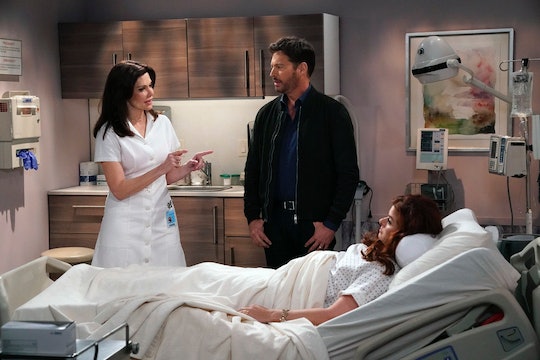 Grace & Leo Are Reuniting On 'Will & Grace'

TV has been banking hard on nostalgia lately, bringing about a wave of "reboots" of old beloved series, such as Will & Grace — which is bringing back not just the four main cast members, but a bunch of the show's costars as well. Understandably, this may leave you scrambling to remember what the story was the last time these characters appeared. For example, what happened between Grace and Leo on Will & Grace? Harry Connick Jr. is returning to the show to reprise his role as Grace's ex-husband.

Before the revival premiered, speculation ran rampant about which, if any, guest stars from the original series would be making an appearance. Among the long list of stars revealed to be making a return (a list that included the likes of Jane Lynch, Minnie Driver, Ben Platt, Andrew Rannells, and more) was Harry Connick Jr. who played Grace's on-again off-again husband Leo. He was such a great character in the show that everyone was thrilled that he'd be coming back. But nobody knew in exactly what context he'd be showing up. After all, in the series finale he and Grace were married with a child. But now they aren't? It's a little confusing, so let me break it down.

If you can remember all the way back to the series finale of Will & Grace (and no judgments if you can't), it included a flash forward to the future. In it, Grace is married to Leo with a young daughter while Will is married to his longtime on-again off-again boyfriend Vince and they have a son. Will and Grace also haven't spoken to each other in a very, very long time. But when doing the revival, the show's creators decided that having their main characters not speaking to each other and happily married with children just wasn't authentic to what the show was about.

When the decision was made to bring the series back, we were like, well, we left them with kids, right? And if they have children, then it has to be about them being parents, ‘cause presumably it would be a priority in their lives. And if it wasn’t a priority in their lives, then they’re still parents, they’re just bad parents, right? We frankly did not want to see them being either good parents or bad parents. We wanted them to be Will and Grace.

For this reason, the show decided to simply pretend like the flash forward never actually happened, and so the audience finds Will, Grace, Jack, and Karen exactly as they were when the show wrapped up 11 years ago. They're even living in the same apartments.

So on Thursday's episode, Leo will be making a return not as Grace's husband and the father of her child, but as her presumably disgruntled ex-husband. In the episode, Grace will wake up in the hospital to find Leo standing over her because apparently she never removed him as her emergency contact. She had told Karen to do it, but well, you know Karen. Luckily, this will give the two former spouses an opportunity to work through some of their unresolved issues, which you know they absolutely have.

There's no word yet on whether or not Leo will return for further episodes of the show. What I do know is that the series has already been renewed for a second season, which means there will be plenty of opportunities for Leo to pop up in Grace's life at awkward and inconvenient moments. At least I hope he will.