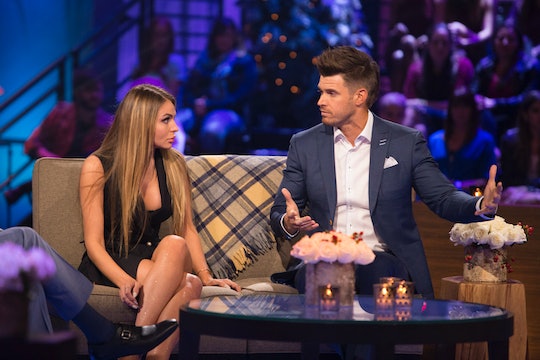 Luke Pell was the guy from JoJo Fletcher's season who made all of us swoon because of his steamy make-outs and his sad-sultry face. Then he went on The Bachelor Winter Games and started a relationship with Stassi, a sweet but shy former Bachelor: Sweden contestant, and I'll be honest, I was rooting for them. However, it seems this relationship didn't last outside of the show. So what happened between Luke and Stassi after Bachelor Winter Games? Based on an exclusive clip Entertainment Tonight posted prior to Thursday's World Tell All special, things between the former duo are pretty chilly and may make you stop rooting for Luke from here on out.

At the beginning of their time on The Bachelor Winter Games, Luke and Stassi bonded over their similiar heart problems. This seemed like a legitimate bonding moment for the two of them and I believed all of it. Over the next couple of episodes their relationship seemed to grow. And apparently I'm not completely off-base in thinking it looks like there was a serious connection because apparently Stassi did as well. Luke's behavior on the reunion show, however, appeared to show what he was really thinking this whole time.

I'm not sure if Luke realized he was still being recorded and filmed when he started having this conversation with Stassi, but recorded he was. Stassi asked why he didn't contact her after the show. She asked why he didn't seem to care about her once the cameras went away. She reiterated again and again that this wasn't a game for her. And she was confused and hurt by his behavior because it was painful. To all of these legitimate questions and confessions all Luke managed to say was, "Yeah" in a tone that could make hell freeze over while gazing indifferently off into the distance.

I feel fairly confident that everyone at this moment is firmly on Team Stassi. Look, I can't say I know what it feels like to feel betrayed on a reality dating show. However I definitely know what it feels like to be with a guy who's totally into me at one moment, and then at the next moment does a complete turnaround. Who really knows what Luke is actually feeling at this moment, but it definitely looks like he was lying to Stassi during his time on the show.

Of course, Luke's attitude at the reunion is all the more galling (and downright confusing) considering the way he positively gushed about how into Stassi he was during Thursday's finale. Luke looked Stassi in the eye and told her that he wanted to continue seeing her after the show and that he wanted to "protect her heart" above all things. Unfortunately, it looks like Luke did not attempt to see her after the show and was not "protecting her heart."

Rumors have also been swirling that Luke is dating a woman named Holly Allen, and that it wasn't exactly a long time after filming Winter Games that their relationship started. Perhaps this person was the reason that Luke didn't choose to contact Stassi after the show. Maybe Luke just wanted to get the word out about his new music coming out as well as his upcoming tour. It's not as though I ever expected him to admit if he was just out for the publicity, but I didn't expect him to be quite so cold to Stassi either. All I know is that she deserved better than this.