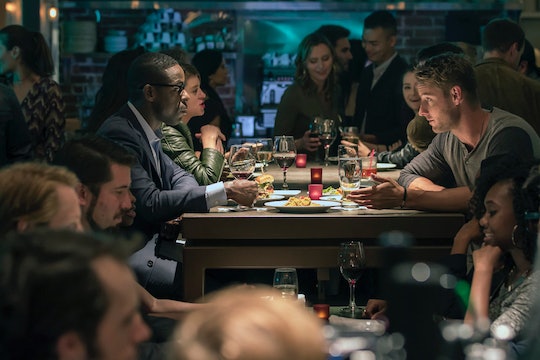 What Happened Between Randall & Kevin On 'This Is Us'? Their Relationship Seems Strained

From the beginning, This Is Us has been about secrets and big reveals that leave fans with their mouths hanging wide open as tears stream down their faces. But among the different relationship dynamics on the show, there are still so many things fans have yet to discover. Like, what happened between Randall and Kevin on This Is Us?

In the promo for Tuesday's episode, it alludes to the idea that Randall and Kevin aren't close as adults, and thanks to the various flashbacks so far, viewers have seen their strained relationship as kids. So in a way, it makes sense that they would grow up to resent each other if that dynamic continued, but it's still so sad to see so much animosity and weariness exist between these two siblings. So what happened with Randall and Kevin on This Is Us and can they reconcile as adults and make things right? Right now, your guess is as good as mine.

There is obviously a whole history in their family that viewers have yet to see, so besides the rivalry of sorts that they'd had as kids, it's clear that they aren't close as adults either. They're obviously in each other's lives enough for Kevin to have a relationship with Randall's daughters, but when it comes to the men themselves, there is not a lot of love lost between them.

In the promo for Episode 7, there is obviously a lot going on with Randall, not the least of which is his relationship with his brother, Kevin. At one point he's seen telling Kevin, "It's the first time in 36 years you said the words 'he's my brother'," so what is that about? Judging by what viewers have seen of the siblings' past, it's clear that at times, Randall was treated more favorably because of his intelligence, given different opportunities to challenge him, and that Jack and Rebecca were impressed by what his mind could do. Thus, giving him attention that childhood Kevin thought was warranted to him instead.

In an interview with ET Online, Justin Hartley (Kevin) revealed that part of Kevin's animosity toward his brother revolved around the relationship he had with their mom: "There was a sibling rivalry between Randall and Kevin and he kind of resented the relationship she had with Randall and how much time he got, how much attention he got." That view of unfairness in his childhood likely crept up into their teen years, bringing Kevin to the attention-seeking, insecure actor he is today, which effectively strained his relationship with his brother along the way.

In an interview with Us Weekly, Sterling K. Brown (Randall) said that in the episodes to come, viewers will see the siblings all butt heads at some point, always vying to be the favorite of their parents, as most siblings do. But it's clear from this week's promo that whatever is going on between Randall and Kevin on This Is Us, runs a bit deeper than your run of the mill sibling rivalry.

Most likely, the rift between Kevin and Randall was born out of Kevin's jealousy, and after a while, Randall was probably tired of being treated poorly for something that was out of his control. So as a result, neither character made much of an effort to be there for each other as brothers should. Then, there was the death of their father, Jack, somewhere down the road, that likely affected all three siblings in different ways and could have been part of the cause for the continued distance between Jack's only two sons.

With a show like This Is Us, though, I sense some intense scenes of open conversations, breaking just long enough for viewers to blow their noses and wipe their eyes. But hopefully, when all is said and done, Randall and Kevin can find some sort of resolution that will bring them closer than ever before.