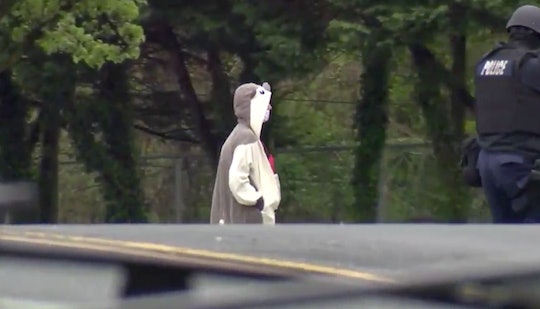 What Happened In Baltimore? The FOX 45 Station Was Evacuated After A Threat

A bizarre but concerning incident at a Baltimore TV station Thursday afternoon culminated in police shooting a uncooperative subject wearing a animal outfit and a surgical mask. The FOX 45 news station was evacuated after the unidentified man entered the building at about 1 p.m. claiming he had a bomb strapped to his chest. Social media was immediately filled with posts from concerned members of the public, many of whom were left wondering about the unsettling case and what had actually happened outside the Baltimore station.

Witnesses on the scene Thursday reported that wires were visible protruding from the man's outfit, which led many to believe he was wearing some sort of explosive vest. Police representatives later reported that the device that appeared to be an explosive was actually aluminum-covered candy bars bound with wires.

The suspect was removed from the scene in an ambulance just before 4:30 p.m., although a Baltimore police spokesperson confirmed he was alive. A vehicle had also been set on fire with a rag and gas tank nearby, and was being investigated as an arson at press time. It was not confirmed whether the vehicle fire was related to the man in the outfit, which was described as a panda or hedgehog onesie.

A security guard in the FOX 45 building, which is located in the Woodberry section of Baltimore, discreetly called 911 when the man first entered. The guard later told CBS affiliate WJZ that the man had a flash drive containing files that had to do with astronomy.

"...Black holes, the sun, about it being liquid and gas, and he just wanted to say that the government was wrong in thinking about the way they do when it comes to anything in space,” the guard said.

The man was described by authorities as a 25-year-old white male believed to be from elsewhere in Maryland. He was reportedly in serious yet stable condition, and was described as conscious and alert. A motive has not yet been determined, although he reportedly wanted to get the information he had on his flash drive onto the air, according to police.