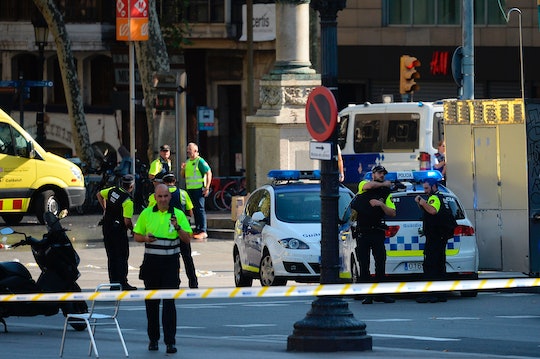 News of a possible terror attack broke late Thursday morning, and the world is trying to figure out what happened in Barcelona. There was reportedly a hostage situation in the Las Ramblas area after a van plowed into a crowd of people, according to the Independent. The driver fled on foot following the crash, and armed men have been reported in a nearby restaurant. No group has claimed credit for the attack yet, but the white rental van followed a tactic that's been used in several similar attacks across Europe over the last year.

UPDATE: El Pais has reported that police confirmed 13 victims are dead, and about 20 more are injured.

PREVIOUSLY: According to preliminary reports, the crash caused injuries to several people, but an exact figure is still unknown. Las Ramblas is a popular summer tourist destination. Catalonian police tweeted early Thursday afternoon that there have been some fatalities. The area has been cordoned off and neighboring areas have been evacuated, according to the Spanish newspaper El Pais. Police are looking for a second van that may have been involved, but no motive has been confirmed at this time. One witness told a local TV station that they heard gunshots following the initial attack, according to CNN, but the police tweeted that no shootout had occurred. Police confirmed to ABC News that they are negotiating with two armed hostage-takers who have barricaded themselves in a restaurant.

Shortly before 1:00 p.m. Eastern Time (7:00 p.m. local time), police confirmed via Twitter that the incident was a terror attack. A Spanish passport was reportedly found inside the van. At a press conference, Interior Minister Joaquim Forn only confirmed one fatality, but cautioned that the number could rise, as some of the injuries were quite serious. An hour after the incident began to unfold, authorities were still cautioning residents to stay indoors, and witnesses of the crash were urged not to share images of the victims on social media.

CNN has reported that "more than a dozen" hostages inside the restaurant have been injured in addition to the victims hit by the van. Of the total 32 injured now being reported, police say 10 are in serious condition. Negotiations do not appear to have progressed. El Pais reported that police implemented checkpoints at all access points into Barcelona, as state and federal authorities convened an emergency meeting to discuss the attack. Several European leaders offered condolences to the victims over social media.