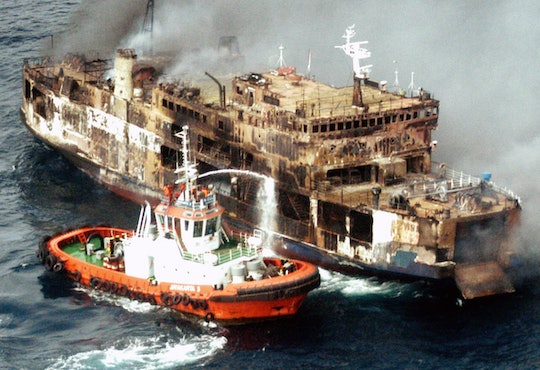 Although there may have been as many as nearly 250 people on board an Indonesian ferry when it caught fire Sunday, killing at least 23 passengers, there were only about 100 life jackets available, Al Jazeera reported. It's devastating, but not uncommon, news out of a country of 17,000 islands that uses ferries as a primary mode of transportation. But what happened in Indonesia is nonetheless an awful way to start the New Year. As authorities continue to work to locate the missing and to identify bodies, police are telling media outlets that the fire erupted when the vessel was near the capital of Jakarta because a power generator short-circuited.

"Thick smoke suddenly emerged, blanketing the cabin," a survivor named Ardi, who was on the Zahro Express with his son, told Reuters of the ordeal as he recovered in a hospital. "All passengers panicked and ran up to the deck to throw floats into the water. In a split second, the fire becomes bigger coming from where fuel is stored."

The result was tragedy where there should have been celebration. BBC News reported that the ferry's destination had been the island of Tidung, a popular holiday destination, where passengers would have recognized the New Year. Instead, people were "fighting for life jackets," as another passenger told local media outlets.

According to the Associated Press, the fire started about 15 minutes after the after ferry departed from Muara Angke, and that afterwards about ten other ships were engaged in attempting to locate at least 17 people who were believed to be missing. Twenty of the bodies that were found in the gutted half of the vessel were so severely burned that they could not be immediately recognized, the outlet reported.

These kinds of accidents involving ferries are not at all unusual in Indonesia, a sprawling archipelago. The ferries that routinely transport people from island to island are oftentimes overcrowded, and, as appears to be the case with the Zahro Express, carrying far too few life jackets. And according to the AP, police are investigating the captain of the ferry post-fire.

In 2009, Time reported that ferry boat accidents in Asia — particularly in Indonesia, the continent's poorest country — are an enduring problem, and once much deadlier that plane crashes. In 2008, for example, nine ferry accidents there killed 1,5000 people, while four plane crashed claimed 93 lives. Officials there agree that these deadly occurrences generally stem from both human error and or negligence.