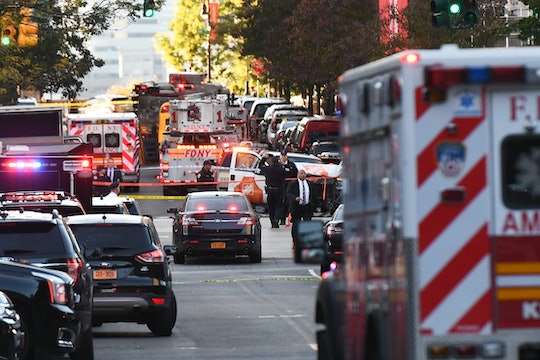 As authorities investigate a suspected terrorist incident that happened in New York City on Tuesday afternoon, at least eight people are reported dead and more than a dozen have been injured after a man driving a truck plowed through pedestrians on a crowded bike path downtown. Details are still continuing to emerge about what happened in Lower Manhattan, but early reports indicate that the suspect was apprehended at the scene and that he worked alone. The attacked happened close to the World Trade Center memorial and prompted nearby schools to go on lockdowns.

Many New Yorkers (and the world) first learned of the tragic situation shortly after 3 p.m. Eastern Time, when the New York City Police Department began tweeting that the vehicle — later identified as a Home Depot rental truck — had entered the path, hit pedestrians, and ultimately struck another vehicle. At that point, according to the NYPD's account, the suspect got out of the truck displaying what turned out to the imitation firearms. Authorities shot and injured the subject at that time.

According to CNN, the driver of the truck exited the vehicle only after crashing into a school bus. The four people who were later removed from the bus suffered minor injuries, the news outlet reported. Additionally, others were "being treated and evaluated at the scene," a fire department spokesman told The Washington Post.

At a briefing soon after the attack, New York City Mayor Bill de Blasio condemned the suspect's actions as "a particularly cowardly act of terror" that was intended to break our spirit," according to Metro.

Citing unnamed law enforcement sources, CBS News identified the suspect as a man who is reportedly from Tampa, Florida. His alleged attack on Lower Manhattan does not appear to be tied to a larger terrorist plot, with New York Gov. Andrew Cuomo calling the 29-year-old a "lone wolf."

That may come as a relief for the city, but it doesn't change the harrowing reality for the victims of the attack, their loved ones, as well as all New Yorkers and Americans in general. Six of the victims died at the scene, NBC News reported, while two more were pronounced dead at hospitals. All were reportedly men. The suspect, for his part, sustained a gunshot wound to the abdomen after reportedly driving on the bike path and then once again entering traffic. The imitation weapons he allegedly brandished at that time were likely a pellet gun and a paintball gun that NYPD commissioner James O'Neil told CBS News were later recovered at the scene.

President Donald Trump appeared to respond to the attack on Twitter a few hours after it happened, linking what happened to the terrorist group ISIS. "We must not allow ISIS to return, or enter, our country after defeating them in the Middle East and elsewhere. Enough!" he tweeted. According to The Guardian, ISIS has not come up in the public statements of officials in New York City.

The suspect drove on the bike path for about eight-tenths of a mile, according to the Associated Press, enough time to leave behind horrible destruction. "I saw a lot of blood over there," Uber driver Chen Li told the outlet. "A lot of people on the ground." And WYNC reported that two bodies were at one point visible amid mangled bicycles.

The horror that played out in New York City Tuesday is the type that Americans — especially those in densely populated cities — fear more and more. Perhaps one thin silver lining is that, as more information begins to surface about what exactly happened and why, Americans all around the country will step up to support those most affected.

More Like This
Everything We Know About 'Virgin River' Season 4 Right Now
Britney Spears & Sam Ashgari Share They Lost Their "Miracle Baby" In Statement
First Look: The New Jujube x Lilo & Stich Collaboration
You Can Walk Through Barbie's Dreamhouse & Fulfill Your Childhood Dreams This Summer