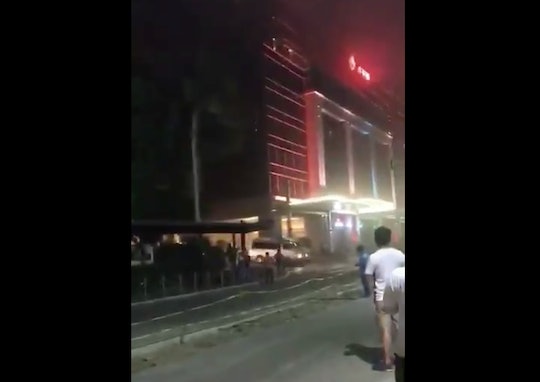 Reports Of A Major Attack At Manila Resort

Local authorities on Thursday reported gunfire and explosions at Resorts World Manila in the Philippines. While details were not immediately available, photos and video from the scene showed chaos and confusion as police and SWAT teams swept the area. What exactly happened at the Manila resort is still unknown.

UPDATE: According to the Associated Press, a Philippine police chief on Thursday told reporters in a statement that there was "no evidence that casino attack is terrorism and no confirmed reports of gunshot wounds."

EARLIER: According to CNN Philippines, hotel employees claimed a masked gunman was reported on the second floor of the hotel, firing at guests. Witnesses who spoke to Al Jazeera claimed that there were several suspected attackers "wearing masks and black shirts."

The resort, which operates 24 hours a day and serves tourists in the Newport City commercial area, a section of metropolitan Manila according to CNN, is home to a number of hotels, a theater, a cinema, and a popular casino. It's also located "across from Ninoy Aquino International Airport."

Around 1:30 a.m. local time, emergency responders were seen treating victims, many of whom were lying on stretchers. Others sat on the ground seemingly in shock.

According to The Sun, one witness said in a Facebook video that the reported explosions and gunfire could be heard from outside the resort. "I live right behind Resorts World," they said, "... and you can see the smoke and hear gunshots and people are shouting at each other."

Resorts World Manila is currently on lockdown following reports of gunfire from unidentified men. The Company is working closely with the Philippine National Police to ensure that all guests and employees are safe. We ask for your prayers during these difficult times.

Fernando Atienza, a spokesman for the Pasay Chapter of the Philippine Red Cross, told the Manila Times that there were still victims trapped inside the hotel and that some of the victims first responders were able to reach had "suffered serious injuries because they jumped from the second floor of the hotel." Atienza added that victims were being transported to the San Juan de Dios Hospital in Pasay City and St. Luke’s Medical Center in Taguig City.

Although authorities did not immediately confirm whether Thursday's attack was officially being treated as an act of terror, it does bear similar hallmarks to previous attacks on other civilian centers and metropolitan areas across the globe. The Philippines has also experienced a wave of terrorist attacks in recent years; SITE Intelligence Group Director Rita Katz tweeted on Thursday,

Katz's report was not immediately confirmed.