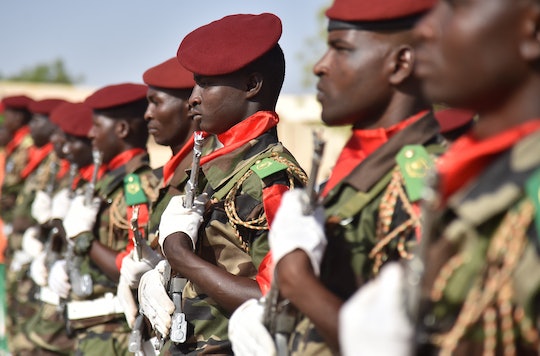 What Happened In Nigeria? The Country Has Been Hit With Recent Terror Attacks

The world is still grieving over the terror attacks that occurred in Brussels on Tuesday, but sadly, the events in Brussels weren't the only recent acts of terrorism to claim innocent lives. As the viral hashtag #PrayForNigeria began trending on Twitter Thursday, many are now wondering what happened in Nigeria, and why it's in the topic of conversation once again.

As reported in The New York Times, two female suicide bombers detonated explosives last Wednesday at a mosque in Maiduguri, located in northeastern Nigeria. The bombings killed 25 and wounded at least 18. According to the AFP, there was "no immediate claim of responsibility" for the attacks, but it "bore all the hallmarks" of Boko Haram, the Islamic State affiliate that has been terrorizing Nigeria for several years now. Boko Haram was widely covered in the Western media in 2014 after the group kidnapped 219 schoolgirls.

According to The Times, this attack is typical of Boko Haram's new strategy, which is to focus on suicide bombings rather than seizing new territories in northeast Nigeria, where the group has already succeeded in displacing millions. According to Human Rights Watch, as of early 2015 Boko Haram had raided 130 towns and imposed Sharia law "in a shocking display of its military power."

Sadly, last week's attack wasn't the deadliest to recently occur in Nigeria. Just last month, on February 11, CNN reported that two female suicide bombers killed 58 and injured at least 80 at a camp in Dikwa, also located in northeastern Nigeria. The camp, tragically and ironically, had been erected to shelter those displaced by Boko Haram's terrorism in the Borno state. According to the outlet, a third female suicide bomber aborted her mission at the last minute when she realized that her family was residing in the camp.

CNN reported at the time that the would-be bomber was taken into custody, where she warned Nigerian officials that there would be future attacks. "She warned more attacks were underway as the female bombers would sneak into the camp in different guises," Satomi Alhaji Ahmed, head of the Borno State Emergency Management Agency, told CNN.

Additionally, on February 1, USA Today reported that 86 people had been killed the previous Saturday during an attack on a village in northeastern Nigeria. According to a survivor, children were burned alive during the attack. Surprisingly, the brutal event wasn't widely covered in the American media, although USA Today reported that "there was little information about the sequence of events that led to the deaths of the children" and that the outlet was "unable to verify the account" itself. Later, a report at The Guardian confirmed that in addition to live burnings and gunshots, the attacks included detonations from three female suicide bombers.

According to an article out this week in Newsweek, Nigerian president Muhammadu Buhari claimed last year that the Nigerian military had "defeated" Boko Haram, but attacks and abductions have clearly been continuing in 2016. Indeed, just today, the UK's Daily Mail confirmed local reports coming from Nigeria that 16 women and girls had been abducted from a "remote area" in the northeast.

No one's quite sure why reports of the most recent attack just started trending on Twitter now. Certainly, the initial attack was covered in the media at the time, although the more recent attacks in Turkey and Belgium may account for the muddled publicity the Nigerian attacks received. No matter the reason, it's safe to say that the sudden onslaught of support and positive messages dedicated to the people of Nigeria is a pretty important thing, in and of itself — and for that, we can all be grateful.