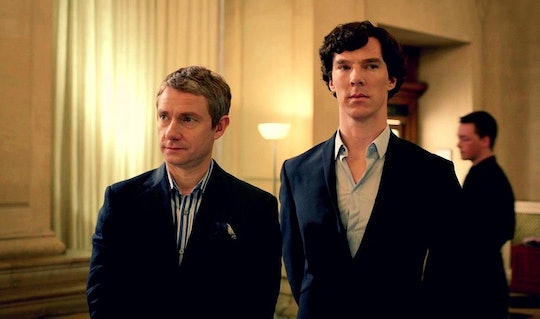 Everything To Remember About 'Sherlock' Season 3

Sherlock returns stateside for its fourth and possibly final season's U.S. release on Jan. 1, 2017, but with such short installments spaced so far apart, it can be difficult to track where we are in the story. The Season 4 trailer teases the return of Moriarty and we know a new villain played by Toby Jones enters the scene as well. But what happened in Sherlock Season 3? Here's a refresher of where things left off for our great detective.

Season 3 came back after a massive cliffhanger left us wondering how Sherlock could possibly have survived jumping off a building. But the premiere quickly unfolded to reveal that he had been working undercover in Serbia for two years under the control of Mycroft (after some cheeky fantasy sequences wherein the writers poked fun at how out of hand some fan theories can become). When Sherlock returned to London and reunited with Watson, however, he found his old partner on the cusp of proposing to a woman. They tussled over Sherlock's faked death (Watson understandably felt betrayed; Sherlock predictably didn't understand emotions), Watson got kidnapped, Sherlock rescued him right before he died, and the two thwarted a terrorist attack on London together, eventually making up.

In the next installment, we saw Watson's wedding, for which Sherlock was a nervous best man. In lieu of a traditional speech, Sherlock simply sped through a few of the cases they've solved together, which led him to spot and thwart a murder in progress at the wedding and capture the culprit (the wedding photographer, naturally). Sherlock also happened to deduce that Mary was pregnant, and accidentally spilled the beans because of course he did.

The finale found Sherlock with an apparent girlfriend (the maid of honor from the wedding, duh), but it turned out that he was just using her to get closer to her boss, Charles Augustus Magnussen, a very powerful newspaper magnate who'd been blackmailing people. When Sherlock finally got close to Magnussen, he discovered Mary was already there. She had also been working as an undercover operative. She wound up shooting Sherlock in the chest, an attack he survived thanks to his mind palace. After recovering, Sherlock killed Magnussen, learning that he, too, stored all his incriminating information in a mind palace of his own.

Obviously, committing murder is a serious crime, so Mycroft had no choice but to send Sherlock back to Eastern Europe on a suicide mission as punishment. However, at the very last minute, Mycroft discovered that Moriarty had returned and called Sherlock back to help thwart the villain.

Benedict Cumberbatch himself confessed in an interview with GQ that Season 4 ends in "a place where it will be pretty hard to follow on immediately," which may mean it brings about Sherlock Holmes' death, or it may simply mean a tidy end to his sleuthing career via a plush retirement. We'll have to stay tuned to find out what comes next.