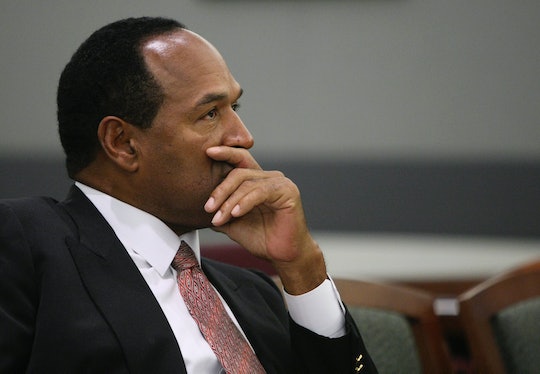 What Happened In The O.J. Simpson Civil Trial? He Had To Pay Millions

Although O.J. Simpson was famously acquitted in the criminal case that put him on trial for the murders of Nicole Brown Simpson and Ron Goldman, he was held responsible for their deaths in a civil trial. It was considered a victory, even just a minor one, by the families of the victims, though it did not ultimately result in the justice they really sought. It can be somewhat confusing to figure out how someone can be acquitted in one court and found responsible in another for the same crime (did Ashley Judd's Double Jeopardy teach us nothing?), begging the question: what happened in the O.J. Simpson civil trial?

Let's tackle what makes the two trials different, aside from their opposing outcomes. In a criminal trial, to convict someone of first degree murder, the jury must be convinced beyond a reasonable doubt. In a civil trial, there is less burden of proof; in the Simpson case, the prosecutor only had to prove that Simpson's actions led to the deaths of the victims in question. He wasn't on trial for murder, but for causing the wrongful deaths of Goldman and Brown Simpson. In a criminal trial, the outcome will result in jail time; in a civil trial, the result is usually a payout. It may seem like a tenuous distinction to make, but while Simpson was found responsible, he wasn't found guilty.

The civil trial was not televised, and lacked the dynamic courtroom presences that had brought so much attention to the criminal trial. Simpson also took the stand, which he did not do in the original trial, undergoing round after round of questioning by the prosecution that seemed to poke holes in his statements. One big facet of the case involved shoes; a bloody footprint was found at the crime scene that indicated a specific size and brand that were both unique. It was a Bruno Magli shoe in size 12 (Simpson's size), a type of shoe that had sold under three hundred pairs in the United States. Simpson asserted that he hadn't bought them and didn't remember wearing them, and was then treated to multiple pictures of him doing just that. Simpson also admitted to having hurt his ex-wife, though he was speaking of events that occurred before the night of the murders.

Simpson: Because I shouldn’t have handled the situation the way I did. I’ve—all my life with Nicole, no matter what was going on, I handled it without being physical with her. And that time I got physical with her and I’m ashamed of it. I wish it not had happened.

What was perhaps most shocking was just how much Simpson was expected to pay in damages — a large number now, and definitely a large one 20 years ago in 1997. Simpson was required to pay $33.5 million dollars, though very few people believed he even possessed that sum or would be capable of earning that much in the future. He was already hundreds of thousands of dollars in debt. That didn't matter to the families of the victims, who only wanted justice for the people they lost. Ultimately they received about half a million from the auction of some of Simpson's belongings – a fraction of what the court had awarded them.