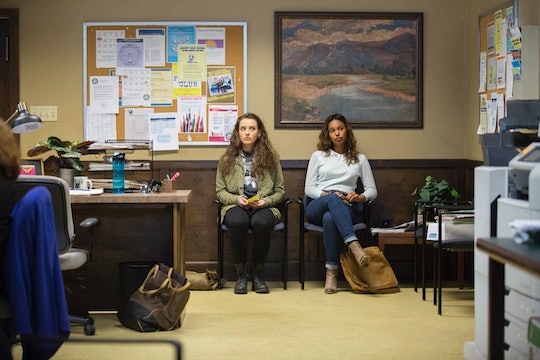 Mr. Porter Is Hiding Something On '13 Reasons Why'

(Warning: this post contains spoilers from Episode 3.) Throughout Netflix's newest series, viewers follow along as Clay Jensen listens to 13 tapes his classmate Hannah Baker left behind after she committed suicide. As is often the case when someone ends their life, many people including Clay and Hannah's mother Olivia, are hoping to find out what led to Hannah's death and with each passing episode, more pieces of the puzzle come together. Everyone's looking at least somewhat guilty, including Hannah's guidance counselor, Mr. Porter. When asked if he met with Hannah prior to her suicide, he looked uncomfortable and later ripped out a page from his calendar. So what happened on October 10 on 13 Reasons Why?

Hannah's parents are currently in the process suing the school because they believe their daughter was bullied by her peers, which is proving to be very true. This led the principal to meet with Mr. Porter and ask him if he'd met with Hannah at all or heard her say anything to suggest she was depressed. He claimed only met with Hannah the year before about college plans, however, he then looked through his calendar and tore a page out (dated October 10), which may have included a meeting with Hannah that he'd rather not see come to light. The question is — why deny that it happened and get rid of the evidence? Did Hannah come to Mr. Porter for help and he didn't take her seriously? Or did something even worse happen?

Although it's doubtful Mr. Porter himself is on one of the tapes (so far it's only featured teens in Hannah's class), that doesn't mean he didn't also play a role in Hannah's decision to end her life. If he is involved somehow, what makes it worse is that Mr. Porter is an adult that Hannah should've been able to trust to help her and if he failed in that respect, then he failed in his job. To make it worse, he's now pretending that he didn't know anything or even suspect that Hannah might be feeling suicidal.

Or maybe, just like everyone else on the tapes, he didn't even realize what his one little act could do because isn't that the point of this show? That while these people, Justin, Jessica, Alex, and so many others, thought they had done nothing wrong and couldn't understand why Hannah killed herself, the truth is they all played a part. And maybe, just maybe, if one person had reached out to Hannah and tried to offer her help, she wouldn't have died.

Fans will have to keep watching to find out the truth about everything that led to Hannah's decision, but right now everyone's looking a little guilty.