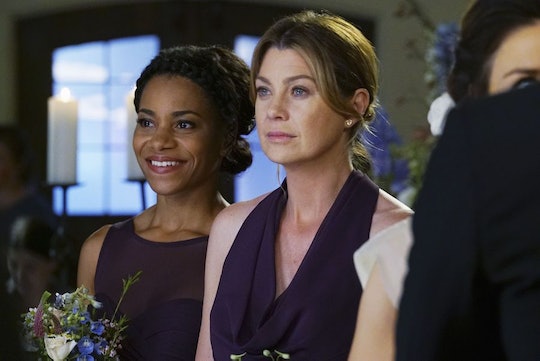 What Happened On 'Grey's Anatomy' Season 12? There Were A Lot Of Ups And Downs

This fall Grey's Anatomy will begin it's thirteenth season and it seems a bit unbelievable. We've watched Meredith Grey go from surgical resident to head of general surgery and she's been through a lot just to get to where she is today. A lot has happened in the past 12 seasons but what we really need to know is what happened on the last season of Grey's Anatomy. Season 12 was filled with multiple ups and downs for all the doctors at Grey Sloan Memorial Hospital. Here's what went down.

At the start of the season Meredith, along with Amelia and Maggie, moved back into her mother's house and tried to co-habitat, which was easier said than done. Amelia and Meredith constantly butted heads, putting a strain on their already fragile relationship. At the same time, Alex and Jo moved to live in a loft together where Alex proposed multiple times but Jo shot him down every time without a real explanation. Relationships throughout the hospital were in dire straights. With Dr. Bailey as the new Chief of Surgery she and her husband, Ben, constantly had issues, particularly when he performed an emergency C-section on a patient that led to the death of the patient. Making a hard call Dr. Bailey suspended Ben from surgery.

Jackson and April also had a hard time this season when they decided to get a divorce. Naturally things weren't that simple and April discovered she was pregnant right before they signed the papers but didn't mention it because she didn't want Jackson to stay with her just because of the baby. Taking too long to tell Jackson she was pregnant, Arizona decided to tell him for her, causing Arizona and April to have a brief falling out but they're all good now. Although at first it seemed April and Jackson were going to fight for custody over the baby they decided to work it out and co-parent.

The same couldn't be said for Arizona and Callie. Callie began dating a new intern, Penny, who was also involved in the death of Derek, so that was awkward. Once they worked past that though everything was all good, until Penny got offered the Preminger Grant, which required her to be in New York for one year. Without thinking Callie decides to go with her and bring Sofia with her without getting Arizona's consent. When Arizona and Callie cannot come to an agreeable decision Arizona decides to take the case to court and wins full custody of Sofia. Refusing to leave Sofia behind, Callie broke up with Penny and decided to stay in Seattle. Feeling bad, Arizona decides to work out an agreement with Callie so that she can go to New York and be with Penny and have Sofia.

While many relationships fell apart this season, others came together. Maggie dated the new intern, DeLuca, for a brief period before they decided to go their separate ways. Amelia and Owen dated, broke up, got back together, and then got married. Meredith dated a doctor from another hospital for a little while before that ended and she hooked up with Nathan Riggs, a new doctor at the hospital that's friends with April but mortal enemies with Owen. They've worked it out though. Anyway, Meredith likes Riggs, Riggs likes Meredith, and Maggie also apparently likes Riggs. Awkward.

Besides that little surprise the season ended with a mix of good and bad news. The good news is April had her baby with the help of Ben, who if you remember, wasn't supposed to be performing surgeries but desperate times called for desperate measures and in the end he did very well. The bad news is Jo got drunk after she and Alex broke up for good (at least it seemed that way), and confessed to DeLuca that the reason she couldn't marry Alex is because she's already married and the guy is abusive and if she tried to get a divorce he'd find her. Feeling bad for Jo, DeLuca tried to put her to bed but with her top off it didn't look too good when Alex walked into the loft. Needless to say, Alex didn't take in the scene very well and beat DeLuca to a pulp, which is where we last left off.

Make sure to tune in to the Season 13 premiere of Grey's Anatomy on Sept. 22 at 8 p.m. on ABC to see what happens next.