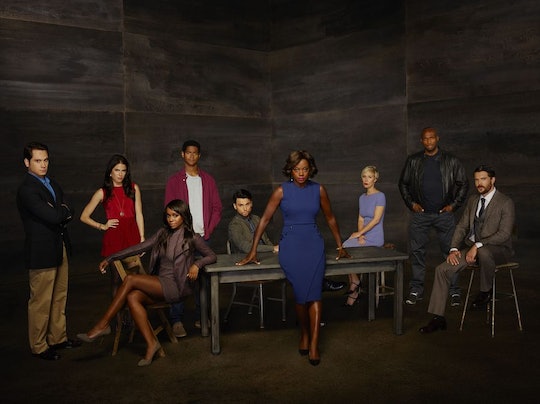 What Happened On 'How To Get Away With Murder' Season 2? Things Got Complicated

When it comes to How to Get Away with Murder it can be hard to keep up. Between the flashbacks, the time jumps, the multiple murders, it's hard to know what exactly is happening on that show. Now with the third season quickly approaching many of us need a refresher on what happened on How to Get Away with Murder Season 2. It's time we took a step back and saw where the second season of HTGAM began and how it all came to an explosive end. A lot went down in Season 2; one can only guess what'll happen next.

You may have forgotten but Season 2 actually began with the death/disappearance of Rebecca. Bonnie, Frank, and Annalise knew Rebecca was dead but the Keating 5 were kept in the dark, though Wes suspected there was more to the story. Meanwhile, Nate was on trial for the murder of Annalise's husband, Sam, and to say he wasn't happy would be an understatement. Knowing it was her fault Nate was in that mess in the first place, she called in her ex-girlfriend, Eve, to help Nate, which of course only caused more problems. In an effort to forget her personal woes, Annalise decided to take on the Hapstall case, where adoptive siblings Catherine and Caleb were accused of murdering their parents.

Long trial short, Nate got off and returned to the police force but not without making a new enemy out of ADA Sinclair who hated anyone that had anything to do with Annalise. However, Asher took care of Sinclair when he ran her over with his car after she was less than helpful when he questioned her about her role in his father's suicide (I'm still skeptical about this by the way; how do we know he wasn't murdered?). In one crazy night, Sinclair's body was brought to the Hapstall house to make it look like Catherine (who Annalise decides she's no longer representing), along with Catherine's suspicious cousin, Philip, killed her and shot Annalise. Except Wes was pissed at Annalise and rather than shoot her in a relatively safe place, he shot her pretty close to the chest and that concluded act one.

In the second half of Season 2 Annalise was struggling to recover from being shot while dealing with her sketchy past, in which it's revealed she was once pregnant and friends with Wes' mom. Well sort of. More like Annalise was trying to get her to testify in the murder case of a young Mr. Mahoney. Of course, Annalise's past clients, just like her present ones, were sketchy and it turns out the elder Mr. Mahoney, who was hounding Annalise to get a testimony from Wes' mom, actually raped her and Wes is his son. Also, fun fact Wes' real name is Christophe.

Anyway, Wes' mom killed herself in an attempt to protect Wes, which caused Annalise to want to tell the police the truth about the Mahoney's. Little did Annalise know that Frank helped bug her room so the Mahoney's knew exactly what she was trying to do and they purposefully crashed into her car, causing her to lose her baby. This secret is why Frank owed Sam and killed Lila in the first place, bringing everything back full circle.

Other notable moments included Wes confronting his birth father only to have the elder Mahoney fatally shot, his blood splattered on Wes' face. Asher and Michaela hooked up and seem to be friends with benefits now. Oliver quit his job and wants to work with Annalise. Oh, and while Annalise went back home to think about all she's done, Frank has just disappeared. It's anyone's guess what will happen in Season 3 of How to Get Away With Murder. Thankfully we don't have much longer to find out.