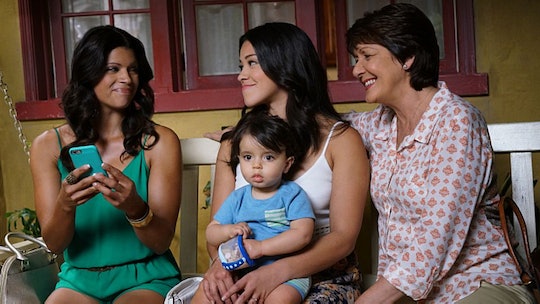 What Happened On 'Jane The Virgin' Season 2? There Were A Lot Of Twists

With each passing season Jane the Virgin just gets bigger and better and it's quite possible you may have forgotten some of the big twists and turns that happened in Season 2. But don't worry, we've got you covered. Here's everything you need to know about what happened on Season 2 of Jane the Virgin.

The season began right where Season 1 left off, with Mateo kidnapped and Jane's family in distress. Sin Rostro took Mateo, but thanks to Michael they were able to get him back fairly quickly only to then have Luisa abducted instead. Meanwhile, Petra stole what was left of Rafael's sperm and impregnated herself with a turkey baster (as you do). Then there's the fact that Jane was once again stuck in the same love triangle between Rafael and Michael. But in the end, she decided to choose Michael, which Rafael found out through the baby monitor. Awkward!

Michael also got a new partner at work: Susanna Barnett. When Luisa was released from her captors, Michael and Susanna were able to piece together that Sin Rostro (Rose) isn't the only crime lord around. However, it turned out Susanna actually worked for Internal Affairs and was hired to look into Michael, which led to him losing his job. Upset over being fired and believing it was Rafael's fault (it was!) Michael got into a fight with Rafael that resulted in Mateo accidentally getting injured, forcing Jane to end things with Michael. However, where one relationship ended, another began. Petra was forced into a marriage with her ex-boyfriend, Milo, but thankfully with the help of Jane, Petra was able to get her mother out of prison so they could get rid of the Milo problem together.

In a twist, it was revealed that Michael wasn't actually fired but rather working undercover to find out the truth about Sin Rostro. Unfortunately, during that time Nadine was shot and killed. At the same time, Rafael and Jane tried to give their relationship another chance, but that came to a crashing halt when Jane discovered Rafael was really the one who had gotten Michael "fired". They should really be more careful about what they say around nanny cams and baby monitors.

Michael continued to search for information about Sin Rostro and the other crime lord, Mutter, who Luisa believed was her supposedly dead mother. Speaking of mothers, Petra's mom killed Milo's henchman, Ivan, but rather than go back to prison she set up Petra to take the fall for it. Thankfully, with the help of Rafael, they were able to prove Petra's innocence and send Magda back to jail. But the mama drama didn't end there. While helping Petra, Rafael decided to give his own mom (who just happened to pop back up in Miami) another chance only to discover she that she is actually the mysterious Mutter.

If you thinks that's crazy it only got crazier when it was revealed that Rose is actually Mutter's daughter. Seriously, Rafael's family is very messy, which became more than evident when his half-brother, Derek, showed up and Petra's long lost twin, Anezka, made an appearance later on.

Speaking of Petra, she went on to give birth to twin girls, Elsa and Anna, (yes, like in Frozen), and Jane and Michael reconciled, putting a damper on Rafael's mood. Things only got worse for Rafael, though, when Michael proposed (again) to Jane and she said yes. And while both he and Petra hoped for the best from their respective siblings, they were both tricked. Derek tried to blackmail Rafael for money and Anezka ended the season by putting Petra in a coma-like state and taking over her identity. Anezka even slept with Rafael because why not?

Meanwhile, Jane and Michael's wedding was a huge success right up until it was time for the long-awaited honeymoon. Then tragedy struck. It turned out Michael's partner, Susanna, was actually Rose and before Michael could spill her secret she shot him in the chest. (Ouch!) Now Michael's life hangs in the balance and we'll just have to wait and see if he survives.

Other highlights from the season include Jane getting into grad school, Alba becoming a citizen, Rogelio being held hostage by an obsessed fan only to later be rescued by Michael, Michael actually getting fired, and Xo and Rogelio breaking up and then Xo becoming pregnant with Rogelio's rival's baby.

A lot happened during Season 2 and things are bound to only get crazier in Season 3. The third season of Jane the Virgin premieres on Oct. 17 at 9 p.m. EST on The CW.

More Like This
Everything We Know About 'Virgin River' Season 4 Right Now
Are You There God? It’s Me, Margaret Is Finally Heading To The Big Screen
Bridgerton Season 3 Will Focus On Fan Favorites Penelope & Colin
Quinta Brunson Is Giving Back To The School That Helped Inspire Abbott Elementary