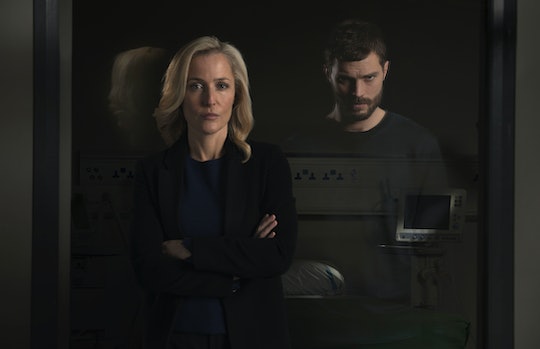 What Happened On 'The Fall' Season 2? Everything To Know Before The Season 3 Premiere

Season 3 of BBC psycho-killer drama The Fall, starring Gillian Anderson and Jamie Dornan, is coming up on Netflix as part of its three-week barrage of fall premieres. We last left our heroine/detective Stella Gibson and veritable creep/serial killer Paul Spector in a major cliffhanger, which Season 3 is poised to pick back up with. And since Season 2 released almost two years ago, fans may be a little fuzzy on the details as we move forward. So what happened on The Fall Season 2? Oh you know, a straightforward confession, more of Stella having sex with her underlings, and a well-placed bullet.

Season 2 ended with Paul bleeding out in Stella's arms after being shot. But how did we get there? One of the series' B-plots, intended to highlight what a skilled and compassionate grief counselor Paul is, involved a client of his named Liz Tyler, who lost her son and remained in an abusive relationship with his father, Jimmy. Paul helps Liz get to a women's shelter, but Jimmy thinks he's becoming over-involved in their lives, essentially tattling on him to his bosses. Jimmy's had it out for Paul ever since and his intimidation finally comes to a head when he shoots Paul in the Season 2 finale cliffhanger.

Paul, who has bizarrely confessed to all of his crimes, makes a deal with Stella in which he promises to give up the location of his final victim if she allows him to see his daughter. Stella can't be sure whether or not she's still alive, but in the hopes of saving a life, she acquiesces to Paul's request. After he sees his daughter, Paul leads the police out into a remote area in the woods to give up his victim's location. He does follow through with his end of the bargain, and Stella finds Rose — still alive, but barely — in the trunk of a car. Meanwhile, Jimmy, who has been following the search party at an apparently undetectable distance, pops out and shoots Paul, along with the detective to whom he's handcuffed (for...safety?), Tom Anderson. (Tom, you may remember, is among the underlings Stella has slept with and subsequently discarded.)

Jimmy winds up getting shot down in the gunfire that's exchanged between him and police, and the final moment of Season 2 shows Stella begging Paul to hold on until paramedics arrive. (Sidebar: no one seems to care about Tom, who has also been shot, least of all, Stella, as she cradles a psychopath literally right next to him.) So that's where Season 3 picks up. We know from the trailer that Paul at least makes it to the hospital, but whether or not he survives remains unknown. You can catch the Season 3 release of The Fall on Netflix Saturday, Oct. 29.