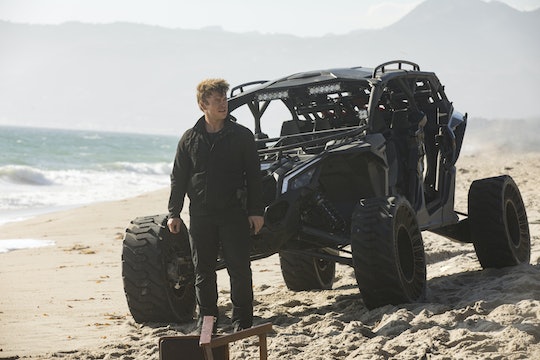 What Happened To Ashley Stubbs On 'Westworld'? Here's Everything We Know

The Westworld Season 1 finale took us on a rollercoaster of plot and emotions but one question lingers among fans: what happened to Ashley Stubbs on Westworld? Luke Hemsworth does make an appearance in the Season 2 trailer (albeit only in a dream sequence), so we know that he at least participated in filming Season 2. But is he still alive? Let's take a look back at what happened before the robot rebellion left us on the edge of an uprising.

Park programmer Elsie Hughes, played by Shannon Woodward, was last seen wandering out into the park on her own — in the shady-sounding "Sector 20" — when she was ambushed by Bernard. Fans saw him attempting to strangle her and it's heavily implied that she met a ~violent end~. However, we never saw a body, and as we already know from Westworld, there's always a possibility for more than one body to exist. According to the Los Angeles Times, some Easter eggs on the faux "destroyed" Delos Incorporated site gave us fuzzy audio recordings, apparently dispatches from Elsie seeking help in the park. It's enough to convince fans that she's still alive. Stubbs, head of security for the park, went out in search of her upon realizing she was missing, but he was attacked by a group of Ghost Nation hosts, a faction of droids that are modeled after indigenous tribes.

That's the last viewers saw of either of them and neither Elsie nor Stubbs made an appearance in the season finale. The brief glimpse we do get of Stubbs in the Season 2 trailer comes from a dream sequence Bernard is describing. He tells Dolores, "I dreamt I was on an ocean, you and the others on a distant shore." A champagne glass washes up in the surf and military-style guards set up a base camp of sorts, which suggests that the scene we're looking at is not, in fact, a dream, but the fallout from the robot rebellion shootout at the board member gala. Bodies float in the water, but survivors have apparently set up camp in this corner of the park to regroup and get a handle on the rogue hosts. Stubbs walks among them alongside Bernard.

Showrunners Jonathan Nolan and Lisa Joy confimed in an interview with Entertainment Weekly that both Stubbs and Elsie are still alive. Teased Joy, "They’re finally getting to experience Westworld as guests and not in the managerial halls, but I’m not sure they’re enjoying their experience."

Meanwhile, Hemsworth himself confirmed that his character survived Season 1 in an interview with the Huffington Post, saying, "Physically? He’s well. He’s doing all right. Just taking a sabbatical." He added, "I hope that's what I’m going to do is rescue Elsie, and we get to run through the park and maybe wear some western gear. That’d be fun." As for whether he's truly a human or the park personnel are also hosts like Bernard, Hemsworth admitted that the production is so secretive that he genuinely didn't know.

Of course, the other bombshell revelation from the Season 1 finale is that Westworld isn't the only park Delos Incorporated has up and running. There's an least one other theme park, which we catch more glimpses of in the Season 2 trailer: Shogun World. We see some brief flashes of Thandie Newton in a kimono, so we know that Maeve, at least, will make it there. As for the rest of the characters hopping worlds, anything is possible in a sentient robot rebellion.