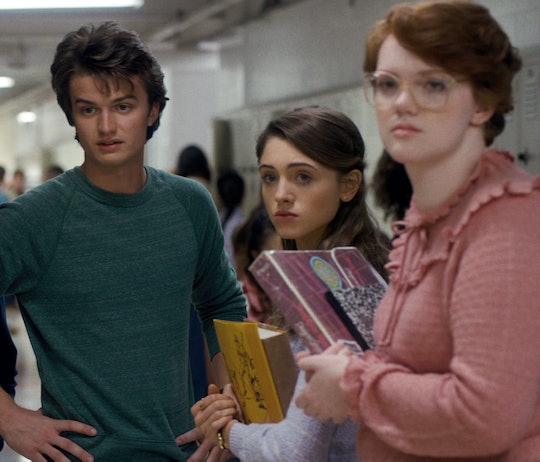 What Happened To Barb On 'Stranger Things'? It Ties Into The Show's Main Mystery

(Warning: This post contains spoilers from Episode 2 of Stranger Things.) Once Will Byer's disappearance sets things off on Stranger Things, the odd occurrences just keep piling up. Mixed in with the strange mysteries in the town of Hawkins is the usual teenage stuff: sneaking out, getting drunk, having a potentially shady boyfriend. Teenager Nancy's rather run of the mill storyline takes a sharp turn for the bizarre during one such night of normal teenage semi-debauchery. While she snuggles up to her brand new boyfriend, she abandons her best friend Barb (a familiar story) and it ends up being a decision Nancy will regret when something awful happens. But what happened to Barb on Stranger Things?

While at her boyfriend Steve's house, Nancy drinks, dives in the pool, and just generally has fun. Barb feels left out as slightly quirky sidekick types have in high school TV shows since time immemorial, and it doesn't help that Nancy encourages Barb to leave so that she can keep on getting closer to Steve. Despondent, Barb does leave, but she doesn't go far; she takes a seat on the diving board of the pool and dangles her feet in the water, the very picture of teen angst. That's when things get weird. The lights start flashing and before anyone knows it, Barb is gone – just like Will.

The next time the audience sees Barb, she's somewhere dark and awful, being tormented by someone or something that drags her offscreen. There was only one witness to Barb's disappearance: Will's brother Jonathan, who was out looking for Will and snapping photographs of the partying teens. He captures Barb sitting forlornly on the diving board, but at the very far side of the picture is the vague figure of Barb's potential attacker.

When Nancy goes to investigate at Steve's house, she finds what she thinks might be an animal of some kind or a man wearing a mask: it's a creature with long arms and no face, a threat that recurs throughout the bizarre events that happen on Stranger Things. The creature seems to link back to whatever is going on at Hawkins Lab, and it seems fair to assume whatever took Will also took Barb.

The two mysteries are have a clear link; the circumstances of their disappearances are too similar. They were both leaving a group of friends to head home on their own and they both saw intensely glowing lights right before they vanished in the blink of an eye. Something took both of them, something bad.