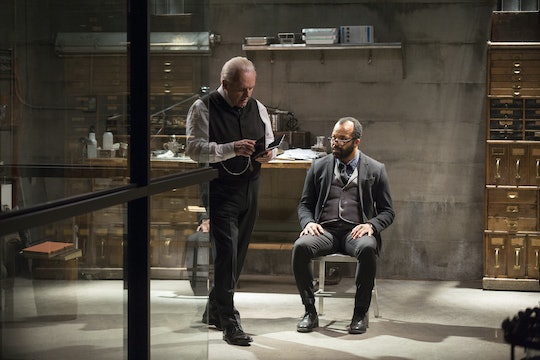 What Happened To Bernard On 'Westworld'? His Tragic History Was Revealed

One of the biggest twists of Westworld's first season was the discovery that Bernard was actually one of the hosts. Unbeknownst to everyone, including himself, Ford had created Bernard to be his protege and to work with him on the other robots. But, as Sunday's episode revealed, that wasn't the only shocking part of Bernard's backstory. The penultimate installment revealed what happened to Bernard on Westworld, and a tragic cliffhanger left us wondering about his ultimate fate.

"The Well-Tempered Clavier" was a huge episode for Bernard for multiple reasons. Though his memories had been wiped by Ford in the last installment after he covered up Theresa's murder at Ford's behest, an increasingly-powerful Maeve was able to snap him into self-awareness once again. Maeve revealed to Bernard that he is a robot, leading him to an epic confrontation with Ford that revealed many tragic aspects of his backstory.

Bernard demanded that Ford allow him to access his earliest memories, programming Clementine 1.0 to hold a gun on Ford to force him to do so, in an attempt to recover every memory that Ford had taken from him. While Bernard was in his "revery," he realized that the tragic death of his son, Charlie, was nothing more than his "cornerstone" – the customized event in all hosts' built-in histories that drives and motivates them.

Unfortunately, that wasn't even the worst part. In the course of speaking with Ford and reliving his past memories, Bernard's scenes with his maker were intercut with scenes of Dolores visiting the chapel. After escaping from a deranged Logan and his men, Dolores was led by the voice in her head to the chapel – the same one that Ford was resurrecting for his "new storyline." While there, Dolores journeyed down into the secret lab facility beneath the chapel. There, she encountered Bernard. Except it wasn't Bernard at all – it was Arnold.

As Ford revealed the truth to Bernard (through their conversation and through Bernard's concurrent flashbacks to his earliest memories "online"), Dolores' imagined conversation with Arnold confirmed the truth. Bernard was created by Ford to be an exact replica of Arnold, right down to the "personal loss" backstory that Ford mentioned drove Arnold in the first episode in which Arnold was mentioned.

As if things weren't complicated enough, Dolores' imagined conversation with Arnold (who is identical, physically, to Bernard) confirmed that Arnold was definitely dead and that Dolores herself had killed him. Her motivations in killing Arnold remain a mystery, but the best bet is that Ford, as Dolores' creator, ordered her to dispatch of his former partner. We already know that Ford was against Arnold's plans for their robots.

Poor Dolores is seriously tripping out between all of these plot developments and her chronic mental time-jumping.

In the end, Bernard, now fully aware of his history as a replica of Arnold, vowed to complete his "predecessor's" mission – to free the sentient hosts from the park, as Arnold aimed to do. Unfortunately, Ford is a mastermind and was one step ahead of Bernard the entire time. Clementine's built-in failsafe prevented her from shooting Ford on Bernard's orders – but Ford was easily able to command Bernard to shoot himself in the head once Ford left him behind in the cold storage facility.

Is Bernard actually dead, permanently? Since he's a host, shooting himself in the head shouldn't necessarily be a permanent demise. But as of now, only Ford and Maeve realize that Bernard is a robot and not a human. If anyone but Maeve finds "dead" Bernard, he'll likely be disposed of as if he were a dead human, rather than repaired in the way that we know hosts are able to be fixed up. For Bernard's sake, here's hoping Maeve and/or Hector stumble upon him when they inevitably wind up in the Westworld facility next week for the finale.