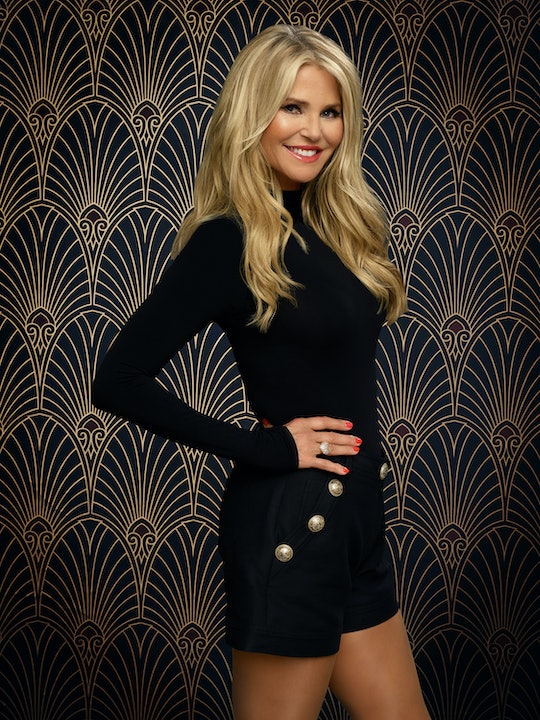 When Dancing With the Stars Season 28 premieres Monday night, Christie Brinkley will no longer be one of the many new stars sashaying their way onto the ballroom floor for the first time. During rehearsals ahead of the season premiere, Brinkley was injured and underwent surgery, so she was forced to pull out of this season’s cast. But all is not lost in terms of finding someone to take her place. Because of what happened to Christie Brinkley on Dancing With the Stars, her daughter, Sailor Brinkley-Cook, stepped in to take her place and save the day.

If Brinkley’s injury was something minor, she might have been able to continue rehearsals and work around it, but during a Thursday rehearsal, Brinkley fell and broke her arm, according to Good Morning America. ABC said in a statement that "Brinkley suffered injuries which required surgery to her wrist and arm," which meant she had to leave the competition and the show indefinitely.

In August, Brinkley told Entertainment Tonight Canada that one of the reasons she agreed to go on DWTS was because she needed dance lessons. She was lighthearted about potentially not even making it far when pitted against other celebrities who might have more dance experience than her. Unfortunately, she won't even get to make it on the dance floor opening night, but she could still be there throughout the season to cheer on her daughter.

Her daughter, Brinkley-Cook, told Good Morning America that while she was nervous to step in at the last minute to take over, she embraced the challenge and the opportunity to help her mom. "I’m doing this mostly for my mom," she said. "I just want to make her happy and make her proud. She loved doing this, she loves dancing and she loves performing and getting hurt was her worst nightmare."

Brinkley released her own statement following her injury and even now, she seems to have a positive outlook on the upcoming season of DWTS, despite no longer being able to compete in it herself. "Showbiz is all about getting a break, and Sailor and I both got one on Dancing With the Stars this season," she said, in reference to her injury. "Sailor joined the cast when I got mine… ouch somebody stop me, it hurts to laugh."

Brinkley isn't the only celebrity contestant on DWTS to sustain an injury before or during a season. In Season 8, Jewel took herself out of the competition before the season began due to a fractured tibia in both legs. And in Season 18, Billy Dee Williams left during the season because of a “chronic back problem,” he explained in his final episode.

Even the professional dancers aren't immune to injuries or health problems which can take them out of a season completely or partially. Maks Chmerkovskiy’s calf injury during Season 24 sidelined him after week one and he wasn't able to return to his celebrity partner’s side the rest of the time she was still in the competition. In that case, then-troupe member Alan Bersten stepped in to take his place, so there are protocols in line in case the celebrities or pros incur injuries.

The most important thing for the stars and pros of DWTS is that they don't push themselves too hard and if Brinkley’s injury was this serious, she had no other choice but to step back from the season. And although Brinkley is out, I wouldn’t be surprised if she still pops up from time to time for the duration of her daughter’s time in the competition to offer support to her and her former co-stars as they compete for the coveted Mirror Ball trophy.