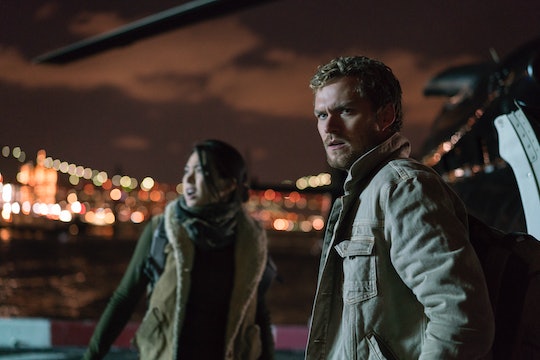 'The Defenders' Danny Rand Has An Important Backstory

Netflix's latest Marvel series, The Defenders, brings all four of New York's superheroes together in one epic team up. These heroes include Matt Murdock, Jessica Jones, Luke Cage, and Danny Rand. However, if you didn't watch each one of these superheroes' individual shows, you may not know that much about them. The last person to join the Netflix Marvel superhero club was Danny Rand and his story kind of leads right into the plot of The Defenders. So what happened to Danny Rand before The Defenders? To put it bluntly, he became the Iron Fist.

When Danny was a child, he was involved in a plane crash that killed both of his parents. He was then rescued by monks and taken to the mythical land of K'un-Lun where he trained and became the Iron Fist. Years later, and at the start of the series, he returned to his home of New York City in the hopes of taking back his father's company, Rand Enterprises.

However, while in New York he discovered that Madame Gao, who works for The Hand, has been using Rand Enterprises to sell heroin. Besides not liking his father's company being used to sell drugs, as the Iron Fist it is Danny's job to defeat The Hand, an ancient and evil organization.

Over the course of the series Danny faced off against The Hand multiple times, and eventually discovered Madame Gao wasn't the only person he knew working with the organization. It turned out his love interest, Colleen Wing, was also working with them, but she believed they were good and considered them her family.

However, when her mentor, Bakuto, turned on Danny and tried to kill her, Colleen switched sides, and helped take him down. Though Colleen and Danny wanted to spare Bakuto's life, Danny's old friend from K'un-Lun, Davos, chose to kill him. Mysteriously, though, Bakuto's body disappeared when they weren't looking, worrying the group.

Still, after they returned to Bakuto's training compound and found it mostly empty, they felt confident that was the end of The Hand. The only person still there was Madame Gao, who was left in a cell. She revealed to Danny that his father's business partner, Harold Meachum, killed his parents. Danny then faced off with Harold, ultimately killing him.

Finally free of all his commitments in New York, Danny decided to return to K'un-Lun with Colleen. Unfortunately, when they arrived, they discovered the portal to the mythical land had disappeared, which is where his story left off.