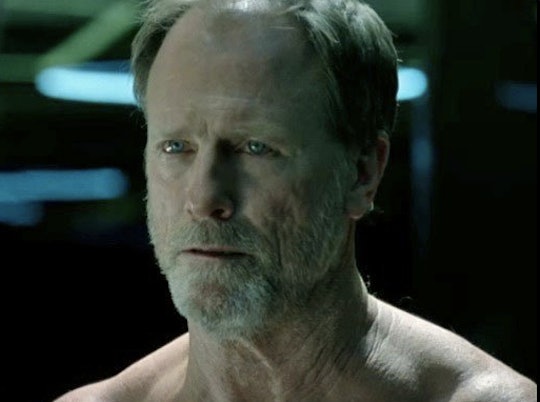 What Happened To Dolores' Dad On 'Westworld'? He's Out Of Commission Now

We're only one episode into Westworld but it's already clear that this will be one of the biggest hits of the year. The show explores complex moral themes, has a hugely talented, sprawling ensemble cast, and is visually impressive. One of the first tastes of the distressing (and depressing) reality of the robot "hosts" (and the first hint that something is about to go very far off the tracks) is the fate of main character Dolores' father at the end of the series premiere. But what happened to Dolores' dad on Westworld?

We've only gotten to know Dolores Abernathy and her father Peter over the course of a single episode, but even in that short time, Peter's eventual fate hits us quite hard. The two have a loving relationship, with Peter repeatedly saying that he is who he is because of his daughter. Dolores, for her part, cares deeply about her father and what he thinks, even mentioning to her love interest Teddy that her father won't like to see the two of them together. Of course, Dolores, Peter, and Teddy are all robots – they've been programmed to have these familial, romantic, or antagonistic bonds among them.

In the episode's beginning, the family is totally at peace, repeating the same general activities (within varying different "storylines") day in and day out. Every morning, Dolores awakens, greeting her father on the porch and asking how he slept. Every day, he gives her a vague but upbeat answer. Until the day he doesn't.

On one of the many days that is repeated again and again, Peter discovered a photo, left behind by one of the guests (called "newcomers" by the local robot hosts). The photo is of a woman in a city. Of course, since this is anachronistic for the Old West-programmed androids, it jars Peter out of his pleasant, simple persona. In a way that's not yet entirely clear, the discovery of the photo disrupts Peter's "core code," causing him to malfunction and be able to access his prior personas.

While each robot in Westworld plays a "part" that they tend to stick with for long periods of time, some of the older robots (who have been at the park for years) have played multiple roles and are reprogrammed when they switch. Peter Abernathy, currently playing Dolores' father, once played the leader of a cannibalistic cult with a penchant for quoting Shakespeare. After discovering the photo in his field and eventually glitching as a result of it, Peter warns Dolores that "These violent delights have violent ends" – a line from Shakespeare, and one that Peter, in his current persona, would not know.

Eventually, because of his malfunctioning, Peter is removed from Westworld and placed into some kind of storage facility, after threatening Dr. Ford and Bernie in his Shakespearean bad guy persona and telling them that he desires to "meet his maker" (a super creepy moment). His eyes looked terrifyingly alive (and distressed) as he and another malfunctioning android were walked into the facility, which is populated with various other out-of-commission androids. Interestingly, Westworld's operators don't appear to destroy the lifelike robots once they are no longer using them – they store them instead, perhaps to later be fixed and rebooted. In any case, I'm certain that the robots in storage will make a reappearance at some point down the road.

Whatever Peter's fate might be, it's clear that his "episode" awakened something in Dolores, though the farm girl doesn't appear to notice when her father has been replaced with a new robot. But after questioning, Dolores claims that she loves her world and would never harm a living thing, she kills a fly on her face in the closing shot of the episode. This might seem insignificant, but it's previously been established that the hosts can't harm living things – including flies. We're definitely about to see Dolores start down an interesting path to self-awareness and possible rebellion.