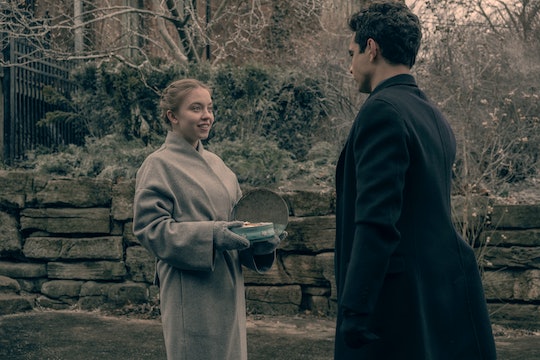 Eden Suffers A Tragic Fate On 'The Handmaid's Tale'

If you haven't seen Episode 12 of The Handmaid's Tale, wait before reading as this post contains spoilers!

When Eden was first introduced on The Handmaid's Tale, she was an unforeseen variable. Raised primarily under Gilead's rule, she was a true believer who was still too young to question the only system she knew. But what happened to Eden on The Handmaid's Tale? It seemed possible that she might turn on Nick for one of his many infractions, but instead Eden became the victim of another one of Gilead's unfair punishments.

Eden's marriage to Nick was arranged by Commander Waterford as one of many unions in a surprise mass wedding. It was framed as a reward for the male Guardians to be married off to even younger girls, but it was also intended to put another obstacle between Nick and June. The resultant marriage was not a good one: Eden was a young teenager who didn't understand why reality wasn't matching up to the life she had been promised, and Nick took his unhappiness out on her.

Nick vacillated between disinterest and anger, which only served to make Eden feel even more isolated and unloved. She had been taken from her family and given to a stranger who didn't even seem to like her. To cope, she sought affection in the arms of someone else — but that's not the kind of thing you can do in Gilead without repercussions.

When Nick and the Waterfords went up north for a diplomatic meeting in Canada, a Guardian named Isaac was left to look after the house. He appeared to be a little closer to Eden's age, and they formed a connection in the brief time they were alone together. Upon his return, Nick caught them kissing, something that didn't bother him because he had no real feelings for Eden. But that additional rejection seemed to push Eden even closer to Isaac, because in "Postpartum" she made plans to run away with him.

Those plans succeeded, but only briefly. Eden and Isaac ran away together, hoping to create a family of their own. In a conversation with June, Eden explained that she wanted both love and a family; she didn't want to be forced to have children with a man who didn't care for her. But she and Isaac didn't get far. Not long after their flight, they were found and dragged back home.

It doesn't seem as though divorce is a possibility in Gilead, so if you're in an unhappy marriage, then you're stuck in it. There's no amicable separation so you can meet someone more suited to you. So even though Nick forgave Eden, there was no way out of her sentence: under Gilead's laws, both she and Isaac were guilty of adultery and that is punishable by death. They were chained and weighted down, then thrown into what looked like a high school pool. Similar weights littered the bottom of the pool, indicating that they were not the first to suffer such a fate.

However, it did appear that both Eden and Isaac had a chance to save themselves. Before the execution, Nick begged Eden to change her story so she could survive. He told her to say Isaac forced her, and promised to do whatever he could to make things up to her. She refused. Then, Eden and Isaac were asked to repent by the man carrying out the sentence. Perhaps if they had, both would have been allowed to live (though who knows under what circumstances), but again they refused. They took the Romeo and Juliet path: they weren't free to be together in life, so they would be together in death.

There's truly no way out of Gilead. Eden bought into all of the dogma, but she still paid the ultimate price.