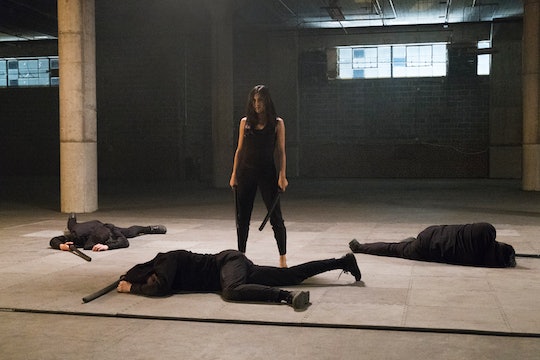 Elektra Became A Powerful Weapon Before 'The Defenders'

The Defenders is the newest addition to Netflix's stable of street level superhero shows made in collaboration with Marvel, following on the heels of Daredevil, Jessica Jones, Luke Cage, and that other guy. I'm kidding: it was Iron Fist. As a team-up series, The Defenders brings four very different heroes together and weaves their separate stories into one. To do that, it requires a little bit of prior knowledge, because it's drawing on events that happened in solo series that some viewers might have skipped. The trailer features former Daredevil character Elektra as a killing machine. But what happened to Elektra before The Defenders to bring about this change? She's a far cry from the woman Matt Murdock (and viewers) once knew.

The fact that Elektra has made an appearance at all is remarkable, because at the end of Daredevil Season 2 she was dead. A showdown with the villainous group, The Hand, resulted in Elektra losing her life in a bid to protect former flame, Daredevil. It took her out right at the moment when it seemed like she was starting to evolve from her morally gray ways and forge a different path. As disappointing as her death was, it was also a hero's moment for her — that is, until The Hand got a hold of her once again.

In Daredevil Season 2, Elektra had to reckon with her destiny. The Hand was convinced that she was actually a mystical entity known as the Black Sky whom they worshipped as a leader — which kind of made sense. Elektra was a skilled fighter who had a loose relationship with the concept of ethics (to put it mildly); she killed for the first time when she was only a child, and had a great deal of trouble containing her more violent impulses. Becoming the Black Sky was something Elektra resisted, but it looks like after her death, The Hand utilized her for their plans anyway.

At San Diego Comic Con, actress Elodie Yung said Elektra would be suffering from amnesia in The Defenders that erased her knowledge of her own identity. "Basically Elektra is amnesiac, she's trained by Alexandra [Sigourney Weaver] to be some sort of a weapon," Yung explained. "How much of the Elektra that we all know remains? Well, we will find out."

In the trailer, Elektra does appear to be visibly lost, acting under the orders of the villainous Alexandra without appearing to know why she's doing it. Elektra seems to have been turned into The Hand's best weapon, which was the very fate she sought to avoid during Daredevil Season 2. Whether or not she can rediscover herself is a question fans will have to keep asking themselves throughout The Defenders.