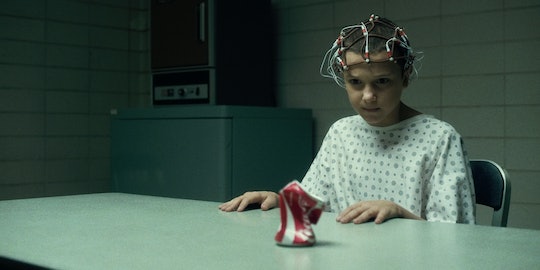 What Happened To Eleven On 'Stranger Things'? It's Not Entirely Clear

Poor Eleven had a tough go of it on Stranger Things. After a life spent locked up in a lab and barely treated as a person, she finally escaped – only to spend the rest of her time either hiding out or on the run. She finally made some friends along the way, but she was never able to be free in the true sense of the word. But even though she never got to be a normal little girl like she so clearly wanted, Eleven was still a hero to the end. Even if that end was kind of confusing. What happened to Eleven on Stranger Things?

A monster was hunting the characters on Stranger Things from the show's very first moment and it was nearly indestructible. No guns, knives, traps, or flames seemed to be able to do a thing to take down the creature, which looked sort of like a grown man dressed in a flower costume, but scarier. In the final battle between the ragtag group of kid heroes and the monster that stole their friend, it didn't seem like anything could help them win. Until Eleven stepped up.

With a heartfelt goodbye, Eleven took out the monster. And when the smoke cleared, she was gone too.

Eleven's powers always seemed to run deeper than they appeared. She could move things with her mind and cross universal boundaries with a thought and a bath. However, her defeat of the monster seemed like a new skill entirely and it's not very clear just what she did to dispose of herself and the creature. Did she blink them both out of existence? Did she transport them to another world – perhaps the monster's home world, so it could run free in the decayed woods it (presumably) loved so much? Why did she have to destroy herself to destroy the monster if she was capable of so many incredible feats?

Things became even more confusing in the wake of Eleven's disappearance. Everyone seemed to accept that the odd girl who came into their lives so suddenly had vanished, but a time jump forward a month proved that not everyone had forgotten about her. Police chief Hopper was shown collecting some snacks from an office party, which he then placed in a box in the woods. Amongst the foodstuffs were Eleven's oft-repeated favorite food: Eggo waffles. If Hopper is indeed leaving food out for Eleven, that must mean she's still out there somewhere to eat it. Can you leave snacks for someone who might be floating in the astral plane?

These questions and more will hopefully be answered in the show's second season. It would be tragic if Eleven's ultimate purpose in the story was to be the weapon she was designed to be. She deserves some normalcy and waffles more than anyone.