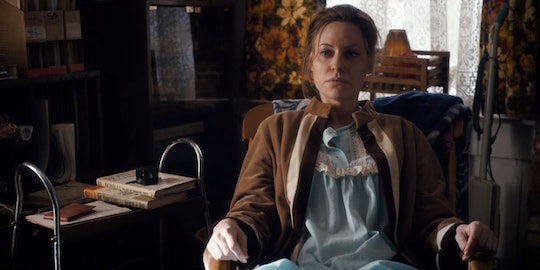 Warning: spoilers ahead for Episode 5! There were a lot questions that needed to be answered after Season 1 of Stranger Things, but the one that created the most theories was what happened to Eleven's mom on Stranger Things. Now, the second season has finally given fans the answers they craved and seemed to confirm at long last that Eleven's real name is Jane, thereby making her mom Terry Ives, as many viewers have guessed.

After Eleven used her abilities to locate her mother, she travelled to her home and discovered that Terry was unable to communicate, other than to say a few nonsensical words repeatedly. However, Eleven soon figured out that there was more her mother wanted to say. While her Aunt Becky showed her around, the lights began to flicker. From her own personal experience, Eleven quickly realized this wasn't some kind of faulty wiring in the house like her aunt thought, but instead her mother trying to communicate.

Eleven used her psychic abilities to connect with her mother, who then took Eleven on a trip to the past. In a series of flashbacks, viewers saw Terry give birth to Eleven and watch in horror as Dr. Brenner took the baby away. Terry was put to sleep shortly after, but when she awoke, Becky was there to inform her that she had lost the baby. This, of course, made me believe Becky was in on the whole thing, but that's neither here nor there. The point is, Terry knew this was a lie, because she saw her baby and heard her cry before passing out. So despite being told otherwise, she never gave up on the hope of finding her daughter again.

The flashbacks then jumped ahead to several years later. Terry acquired a gun and walked into Hawkins National Laboratory, ready to take down the patriarchy aka Dr. Brenner. She forced her way in and located Jane in the rainbow room, along with another little girl. Unfortunately, Terry didn't even get close enough to touch her before she was being dragged out of the room.

After that, Dr. Brenner forced Terry to undergo electroshock therapy, which basically fried her brain. These flashbacks also revealed that the words Terry repeats over and over again have meaning. The numbers she says are the numbers on the combination lock to the safe with the gun she used and the rainbow is obviously in reference to the rainbow room where she knew Jane was being kept.

Although I was confident Dr. Brenner was evil before, this whole sequence of flashbacks only made it more clear. This guy is the purest form of evil out there. Regardless of whether or not Brenner ends up being Eleven's biological father or not, there's no redeeming himself at this point.

Back to Terry, though. While learning more about her backstory was certainly interesting, it's unfortunate that Eleven will never really get the chance to build a relationship with her mother. After Terry shared these memories, it didn't seem like she could share anything else with Eleven, even through her psychic abilities. Then again, who knows? Perhaps there's a chance the damage done to Terry's brain can be undone, but it seems unlikely. For now, I just hope that Eleven is one day able to make peace with the fact that although her "Papa" was incredibly awful, her mother clearly loved her more than anything in the world.