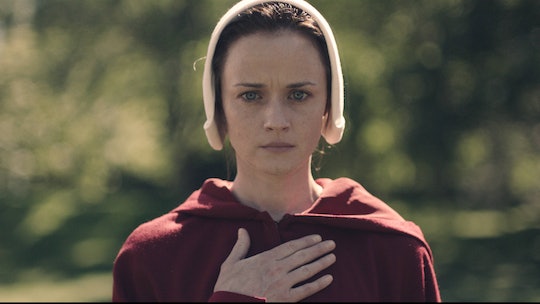 In the first season of Hulu's The Handmaid's Tale, Offred became close enough to her fellow handmaid Ofglen to learn some details about her life before Gilead. Ofglen was previously a professor of cellular biology named Emily with a wife and a son, Oliver, who would have been around five years old in the present timeline. A little was revealed about what happened to Emily's family on The Handmaid's Tale, including why they were separated, but so much was left unexplained.

Emily had two strikes against her under the Gileadan regime: she was a college professor and a lesbian, which alone could have led to her being sentenced to death. Gilead considered anyone under the LGBTQ+ umbrella a gender traitor, and didn't look too kindly on intellectual pursuits for women either. However, because Emily was capable of carrying a child to term, she was forced to become a handmaid instead. Her wife escaped the same fate only because she was a Canadian citizen. Oliver also had a Canadian passport, so the two were able to flee to freedom even though Emily was prevented from joining them.

While Season 1 wasn't able to catch up with the rest of Emily's family, that will change in Season 2.

Emily's family may be safe, but their part of the story is far from over. There's so much that hasn't been fully explored regarding Emily's past, and audiences are sure to have tons of questions about her wife and son going into the second season on April 25. For example: what is Emily's wife's name? Was their marriage happy, or did they separate before Gilead formed? There must be some reason why Emily was unable to follow her wife to Canada. Is Emily's wife trying to get her out of Gilead? Luke was working hard to get information about June (a.k.a. Offred) so that he could save her and their daughter; perhaps Emily's wife is fighting a similar battle.

According to TVGuide, Season 2 will use flashbacks to fill in Emily's story, so many of those mysteries will be solved over the course of the season. In fact, TVLine announced that Clea DuVall had been cast as Emily's wife, whose name is Sylvia, and the show will explore their attempts to escape to Canada together — which will presumably also include an explanation for how Emily was left behind in the first place. Actress Alexis Bledel promised that fans would be surprised by the turns Emily's journey took, telling Women's Wear Daily:

Our writers have crafted this incredible new story. It takes things even further, which I didn't know was possible. It's absolutely brutal. It's a harrowing tale to see it all unfold. I was surprised by three major plot points that my character was a part of. That's a sign of amazing writing.

It's quite the departure from the original novel as well. In the source material Ofglen never shared her real name or her backstory. She committed suicide to avoid being arrested and tortured into giving up the secrets of the resistance. The show has given Emily so much more to do, and it seems like that will only increase in Season 2.

Trailers and promotional material for the new season revealed that Emily has been sent to the Colonies after killing a guard. The Colonies are labor camps in Gilead where residents have to clean up toxic waste until it kills them. Emily has survived so much already, but it seems like her situation will become even more dire in Season 2. Hopefully taking a look at her past will give audiences a better understanding of her present, and explain what Sylvia and Oliver are doing now.