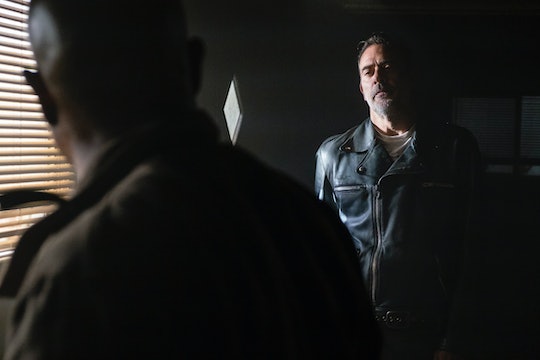 Gabriel & Negan's Fates Are Still Unknown On 'The Walking Dead'

In the premiere episode of The Walking Dead Season 8, Gabriel found himself unwittingly getting locked up in a trailer with Negan while a swarm of zombies gathered outside. Neither has been seen since. So what happened to Gabriel and Negan on The Walking Dead? Whatever went down in that trailer they got trapped in definitely won't be good, but there's no way to know exactly what happened until the show decides to revisit the storyline. Right now fans can only wonder, and hope the answer won't be too horrifying. But really, what are the odds of that?

Viewers have already seen what happens when someone from Rick's side finds their way into Savior territory, and it's never good. Denise was killed by Dwight. Glenn and Abraham were beaten to death by Negan. Daryl was tormented in a cell for weeks. Eugene switched sides to save himself. And Sasha was nearly raped by a Savior before sacrificing herself in a last-ditch effort to surprise Negan with a zombie bite. The only person who ever came out of an altercation with Negan relatively unharmed (mind games and psychological abuse aside) was Carl, and he seemed to skate by only because Negan was feeling charitable that day.

Negan even threatened Gabriel at the very end of "Mercy." Though his remarks were so absurd as to reach the level of self-parody, he did make it clear that he was not going to pass the time with Gabriel playing cards until the zombies moved on. Based on Negan's pattern of behavior prior to this moment, he probably wouldn't kill Gabriel unless he had a good reason to (though what passes for a good reason in Negan's mind is questionable), especially since he wouldn't want to be stuck in the trailer with a walker. But while Gabriel could be safe from death, that doesn't mean he's safe.

Provided they find a way to escape, Negan could imprison Gabriel like he did with Daryl and Sasha in hopes of getting him to become a Savior. Negan always tries to convert people first so that he can utilize any skills they have for himself. However, this situation is a little bit different than previous ones. Negan is presumably still reeling from the loss at Alexandria, and Rick's attack on the Sanctuary; he's probably feeling less merciful than ever. While there's a good chance he will let Gabriel live (for now), there are other ways the situation could unfold between them.

Negan could try to get information from Gabriel about Rick's upcoming plans. Some fans thought Gabriel might end up a spy for Negan (if he wasn't already), but actor Seth Gilliam disagreed with the theory in an interview with ComicBook.com. "I've heard some things about in cahoots, which would be an interesting story twist, by the way in an alternative universe, but I don't really see that happening," he said.

Still, even if Gabriel doesn't join the Saviors, Negan might still try to get him to snitch. Or Negan could just use Gabriel as a human shield to get away from the zombie horde (an outcome nobody wants, to be sure). If they do manage to escape without losing their lives, then holding Gabriel hostage would give Negan an edge over Rick as the battle develops; trying to get Gabriel back safely could result in Rick giving in to some of Negan's demands, whatever they might be.

Of course, it would be ideal if Gabriel took this opportunity to kill Negan and put an end to all of this right now, but unfortunately that's unlikely. Getting rid of Negan might be the dream, but it's one that probably won't be coming true any time soon.