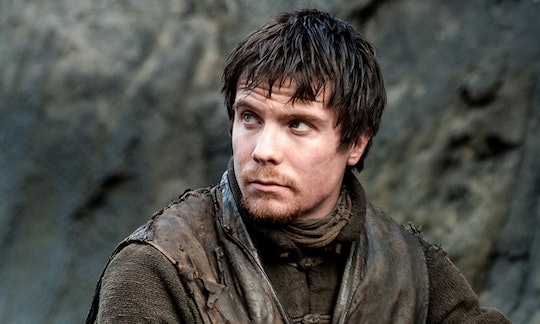 The major contenders for the Iron Throne seem to be down to Daenerys, Jon Snow, and Cersei, but there could be one more option that the show seems to have forgotten about. What happened to Gendry on Game of Thrones? Never forget that there is more than one hunky bastard with a heart of gold and highborn blood running through their veins on this show. Gendry may have left my screen, but he never left my heart. The secondary character hasn't been seen since Season 3, when he escaped from Stannis and Melisandre with the help of Ser Davos.

King Robert Baratheon was kind of the Henry VIII of Westeros, and when he wasn't drinking, eating, or hunting things, apparently spent much of his free time impregnating random women in town. Most of Robert's bastard children were killed by Cersei, but Gendry survived. Melisandre captured him and used his king's blood to try and get rid of the other three kings, Robb, Balon, and Joffrey. Whether the blood was the thing that did the trick is up for debate. But what really matters is that before Melisandre could kill Gendry, Ser Davos helped him escape and we last saw him rowing away from Dragonstone, presumably back to King's Landing where he could just be a normal blacksmith. But if lineage is important in this world — and all the hullabaloo over Dany and Jon's Targaryen roots seem to indicate that it is — then Gendry being a Baratheon is probably going to become pretty important.

Fans have been waiting to hear back from this character for three seasons now, and his return was all but confirmed by his showing up on the red carpet at the Game of Thrones premiere. Furthermore, Marie Claire spotted his name on the IMDB credits for Episode 5 before it was swiftly removed. IMDB is not a flawless resource and errors are often made so this could be a simple mistake, or they accidentally let something big slip. In either case, it's pretty likely that Gendry will appear soon.

Or perhaps he found his way by whatever plot machinations are necessary to Winterfell, where he is about to marry Arya because that would make me happy. Who knows where he's been. All I know is that he's about to come back.