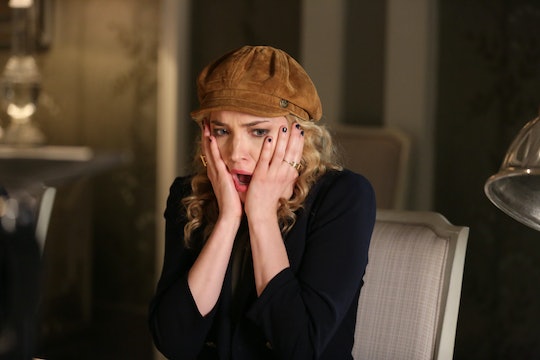 What Happened To Grace On 'Scream Queens'? Wes Explains Her Absence

When it was revealed that Season 1's favorite hot dad Wes would be coming back for Season 2 of Scream Queens, the world wondered if his absent daughter would be returning as well. What happened to Grace on Scream Queens? Wes took some time to explain her absence and actually it's very meta. It turns out that Grace and Skyler Samuels (the actress who plays her) have a few things in common.

When Wes returned, he gave us a little exposition speech about why he's at the C.U.R.E Institute (he's been pulling out his hair and eating it, resulting in a giant hairball in his stomach, naturally). It turns out that after the end of Season 1, he and Dean Munsch moved in together while he tried to start his own microbrewery and write books, but it turns out that Dean Munsch was trying to keep him and his daughter Grace separated. Munsch's hate runs pretty deep after all.

He went on to explain that Grace is currently studying for her Masters degree at Stanford University. This is a pretty big coincidence, considering that Samuels herself was a student at Stanford University when she got cast in the role of Grace. This then prompted her to take a short break from her schooling in order to play the part. Well played, Scream Queens writers. Very well played.

In an interview with Elle, Samuels said, "I'm [sic] still think of myself as a student first, then actor." She had been acting for most of her life before landing Scream Queens, but was hardly a household name. She took a break from college to do the show, because she wanted to put her whole energy into the project. And now that she's on a break (hopefully just a break!) from the show, one can only assume that she's putting her whole energy into furthering her degree.

"A lot of people don't know what to do with the fact that I do both. Like oh, I'm not as serious about acting because I like school? Why does it have to be one or the other?" she told the magazine. She may split her priorities between acting and school, but she definitely puts her whole heart in soul into them both. "Everybody has their own crazy, weird, special thing," she said of her classmates. As much as I wish Grace and her logic would come back to the madhouse that is Scream Queens, perhaps she's better off at Stanford anyway. Then again, maybe not.

By the end of the hour, Wes not only revealed himself as the third Green Meanie, but he also admitted that Grace wasn't really at Stanford University at all. She's at the Stanford Mental Instituation due to all the trauma the Chanels put her through, and now he wants revenge for his daughter. How sweet, I guess? Either way, turns out Grace isn't doing as well as we thought. She doesn't even wear hats anymore, so you know it's serious. I wonder if she knows what her dear old dad is up to.