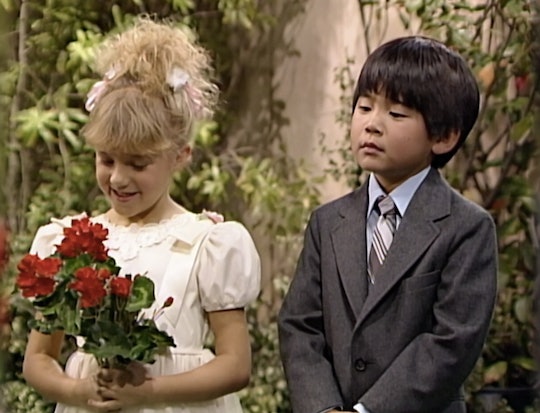 What Happened To Harry Takayama? Stephanie's Childhood "Husband" Did Pretty Well For Himself

Ahh, young love. There really is nothing like it. And Fuller House taps into that romantic phase by reviving one of the first (and possibly sweetest) relationships on Full House. No, not D.J. and Steve. I'm talking about Stephanie and her BFF/fake husband, Harry Takayama. If you were a serious Full House fan, then you may be watching Fuller House and wondering what happened to Harry Takayama, Stephanie's first love.

When we last saw Harry, he and Stephanie were just two kids getting married "in holy mattress money." (And according to the minister, they kissed so it's an official marriage.) But he seemed to fall of the face of the Earth once the kids entered middle school. (I think it was because Stephanie was forced to got to another school due to redistricting, but don't quote me on that.) And since Facebook wasn't a thing in the '90s, they may have lost touch over time.

Luckily, we are reunited with this charmer in episode nine, "War of the Roses." After an abundances of buds arrive at the Tanner (now, Tanner-Full-Gibbler) house, the girls start scrolling through their digital black book to find out which of their suitors may have sent them. As Stephanie is working her way through the list, she gets a text from none another than her hubby Harry saying he expected to hear from her after he sent her something.

Though this may seem out of the ordinary, Stephanie explains that every few years, Harry performs a grand gesture in attempts to start dating her. Naturally she assumes he sent the flowers, and says she's ready to give him a shot now that she's older and wiser. And with Harry being a CPA, she's probably excited about the prospect of dating someone who's responsible and has a bit of cash.

But, sadly, Stephanie and Harry aren't meant to be. When Stephanie confronts Harry about sending her the roses, he denies sending them and says he was referring to the invitation to his upcoming wedding.

Though she may be a bit heartbroken, Stephanie is ultimately happy for her former husband. But then this brings up another quesiton — will they have to get a fake divorce?